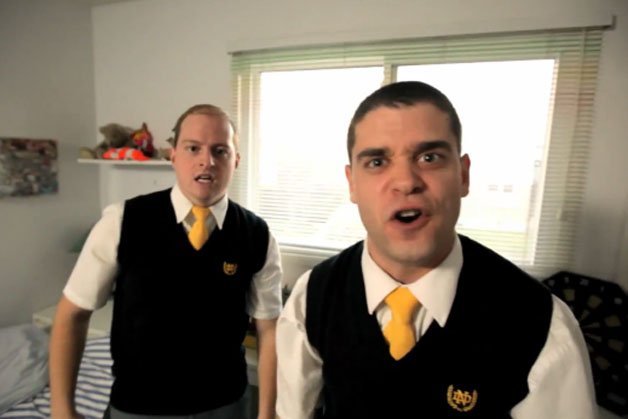 But none of them is as raunchy, outrageous or as NSFW as Rick & Chuck, the eight grade students from Holy Name Elementary School who look innocent on the outside but are really hip-hop wannabes whose misogyny and sexual braggadocio (and obvious pre-adolescent insecurity) come through in angry raps like We’s Hawd and the just-released We’s Innocent.

The demonic duo’s the brainchild of Jay Wells L’Ecuyer (Rick) and Eytan Millstone (Chuck), who created the characters in the sketch troupe the Boom.

I talked with the two tweens before their appearance Tuesday (August 7) at the Rivoli’s Sketch Comedy Lounge.

So Rick and Chuck, who are you favourite hiphop artists?

Chuck: My favourite hip hop artists are the ones who are really good at rhyming words together and kissing girls on the mouth.

You’re performing Tuesday at something called the Sketch Comedy Lounge at the Rivoli. Are you nervous?

Chuck: Yes. I mean, I’m only 13 and I’m scared that if people don’t like our songs they’ll beat us up. I’m scared of being beaten up.

Rick: I get really nervous when I’m onstage and there’s no rap beat playing. The second we start rapping, though, my nerves turn into a burning hatred for everyone in the room.

Where did you tell your parents you’re going on Tuesday?

Rick: Our parents trust us. That’s their biggest downfall.

How popular are you at Holy Name Elementary School?

Rick: Holy Name is a wonderful place. I love everyone there, but I don’t understand their dislike for rap rhymes. Maybe if I learned Creed songs on the guitar they’d like me a bit better.

Chuck: Everyone at Holy Name Elementary School is really nice to us. We aren’t the most popular, but hopefully after they hear our rap songs they’ll want to be friends with us.

Chuck: The prom isn’t until the end of the school year, but I definitely want to go. So far every girl I’ve asked already has a date, so I might end up having Rick be my date.

Rick: Ashley T is gonna go with me. Chuck’s the third wheel, but as long as he closes his eyes and ears while she and I lose our V-cards together, we’ll all have a magical evening.

What did you think about what happened at that Dark Knight Rises screening in Colorado?

Rick: If you mean Anne Hathaway’s performance as Catwoman, then I loved it. I thought she was really good and I would do sweet things to her naked body.

Chuck: What happened in Colorado is really sad. People should only be mean to other people with their words, not guns.

How did you feel about Frank Ocean coming out?

Chuck: I don’t know what “coming out” means because I’m only 13, but I think Frank Ocean has a really nice singing voice and I bet he has a lot of friends because he’s really good at singing.

Rick: I have a lot of gay friends, and one day I hope to call Frank Ocean a friend. We could make awesome songs together.

You coined the term “cumcussion” in your latest video, We’s Innocent. What gives you a cumcussion these days?

Chuck: Hopefully I never get a cumcussion. And hopefully one day I give one to a girl.

What do you think of Jay Wells L’Ecuyer and Eytan Millstone?

Rick: Jay Wells L’Ecuyer is a perfect example of what not to do in life, so every time I get down on myself I look to him and think, “It could be a lot worse.” Eytan Millstone has great hair and a winning smile. He’s the kind of guy a girl could bring to a family wedding and impress everyone.

Chuck: I don’t know who Jay Wells L’Ecuyer and Eytan Millstone are because they aren’t famous rappers, but based on their names they sound like huge dorks.