Ricki And The Flash 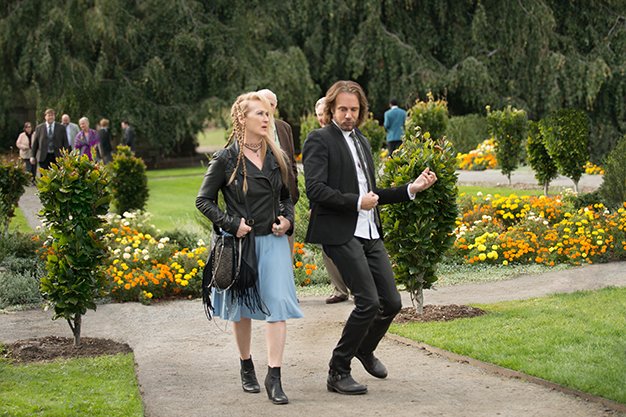 If you’re drooling over the prospect of watching Meryl Streep play an aging rocker, save your saliva. She sings, she plays, she’s got a great cast and director to work with, but a flick can’t work without a decent screenplay.

Streep plays Ricki Rendazzo, lead lungs for a cover band working as the house outfit at an L.A. dive. When her ex Pete (Kevin Kline) – whom Ricki abandoned along with with their two sons and daughter Julie (Streep’s real-life daughter Mamie Gummer) decades ago – phones up to say Julie’s been dumped and has attempted suicide, Ricki heads to Indianapolis to reconnect.

Why does he call her? How could this woman-child with zero self-esteem possibly help? The basic premise is the first of many problems in Diablo Cody’s sadly lacking script. Cody gives us no reason to believe buttoned-down Pete and Ricki could ever have been together.

Other things are similarly nonsensical, like a sequence in which Ricki, Pete and Julie confront the man who left her, and the not-very-believable circumstances under which Ricki gets a wedding invitation.

Worse, Cody has an aversion to the conflict so essential to making a drama work. So the film just glides along to its sentimental finale.

The first shot – of Ricki’s high-heeled wedge boots tapping away while she counts in her band’s version of American Girl – is promising, reminiscent of Demme’s genius 1984 anti-music-video short The Perfect Kiss, with New Order. There he kept the focus tight on the instruments, stressing the band’s musicianship. In fact, Ricki’s music sequences, featuring Ricki’s love interest Rick Springfield on guitar, are the best things in the movie.

Streep is impressive, as usual, but the real surprise is the engaging Springfield, who hangs tough alongside her.

But there’s not much there beyond that.