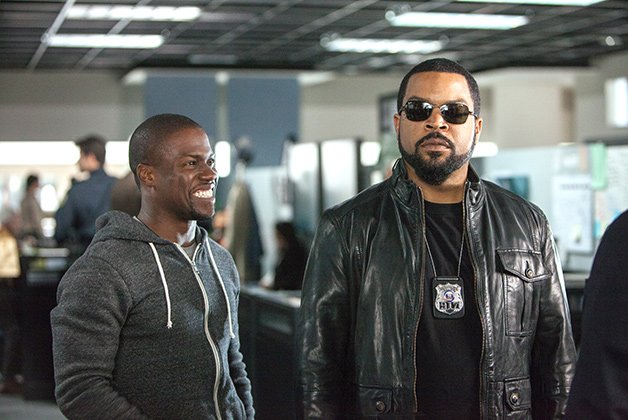 The irony of Ice Cube playing a brute undercover detective is not lost on the former N.W.A. alum, made famous by chanting, “Fuck the Police”.

Midway through Ride Along, the latest iteration of the saturated buddy cop flick genre, Cube pays homage to himself by citing It Was A Good Day, his classic track about going 24 hours without police harassment. And now here he is, starring as James Payton, a detective with an iron fist who shakes down ex-cons for information and threatens frame-ups. There’s a rich opportunity to say something meaningful but instead the premise is played for cheap laughs.

I guess I shouldn’t have expected more from a movie that pairs Ice Cube with Kevin Hart as future in-laws in arms, unleashing them though the streets of Atlanta on an incomprehensible hunt for a criminal mastermind.

Cube scowls. Hart gabs incessantly. The two are reduced to the likes of a growling bear and a yapping parakeet that get no assist from a screenplay as nuanced as a parking ticket. There are a few laughs to be had, though I’m inclined to credit Hart for those, since his Ben Barber freestyles gibberish like an Uzi, with only a few one-liners hitting the mark.

As for Cube, I wonder how Ride Along fits within his long and storied career. He went from gangsta rapper to an actor who banks on his bad boy profile in “gangsta” movies then, as a grown man, he took his former edgy image and safely packaged it in family fare while asking “are we there yet?”

Are we where yet? Are we at the point where a former gangster rapper can achieve mainstream acceptance by starring in kids’ films? Now that Cube’s playing a cop, clowning around and making light of the same police brutality that he once condemned in his music, has he effectively pulled a U-turn from his sharp political views? I’m hoping instead that the forgettable Ride Along is just a detour from an undeniably compelling body of work.