NOW MagazineCultureTheatreRing ‘Round The Moon and The Rose Tattoo

Ring ‘Round The Moon and The Rose Tattoo

RING 'ROUND THE MOON by Jean Anouilh and THE ROSE TATTOO by Tennessee Williams. Presented by George Brown Theatre at. 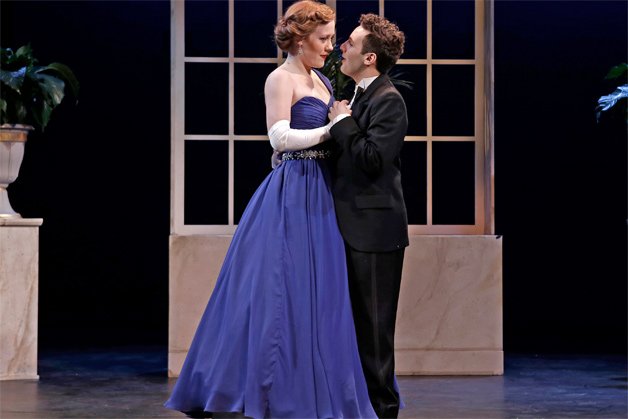 RING ‘ROUND THE MOON by Jean Anouilh and THE ROSE TATTOO by Tennessee Williams. Presented by George Brown Theatre at the Young Centre. April 8-19.

The George Brown Theatre season ended with the 2014 graduating class presenting a double bill of Christopher Fry’s translation of Jean Anouilh’s Ring ‘Round The Moon and Tennessee Williams’s The Rose Tattoo, running in rep. The shows closed Saturday (April 19).

Ring ‘Round plays with the idea of doubling its central figures are a pair of twin brothers who couldn’t be more dissimilar or, in this staging, funnier.

Anouilh’s plays, many dating from the 1940s and 50s, can have an old-fashioned mustiness, a quality of preciousness that doesn’t touch today’s audiences.

But in the hands of director Sue Miner and the young actors, this production has the air of a light romantic comedy. It plays well, moves swiftly, and generally succeeds in entertaining and making the audience feel for a wide range of characters.

On the eve of a ball at a French chateau, twin brothers Hugo and Frederic (both played by Alessandro Costantini) have some troubles. The shy Frederic loves Diana (Charlie Gould) and has been sleeping in the rhododendrons outside her window the manipulative Hugo, who has no trouble wooing women, thinks Diana is wrong for his brother and concocts a plot to break up their relationship.

He forces Romainville (Michael MacEachern) to invite young ballet dancer Isabelle (Fiona Sauder), whom Romainville fancies, to the ball, with the intention of having Frederic fall in love with her.

The plot, filled with ruses, disguises and mistaken identities, moves along with entertaining briskness under Miner’s direction. She’s included a number of choreographed scene changes and some physical business that help develop the characters.

The cast, clearly enjoying themselves, play the comedy with the right delicacy, never turning it into farce, while underlining the differences between the social classes.

There’s lots of acting to admire here, including Gould’s snobbish, jealous Diana Nicole Buscema’s Lady India, a relative of the twins who loves excess of any kind and the thrill of romantic danger Matt Shaw as her fearful lover, forced to play Isabelle’s jealous suitor Stephan Ermel as Diana’a father, a millionaire who’s not always happy with his money and Michelle Langille, performing with a touch of Carol Burnett as the brothers’ haughty mother who’s wiser about the affairs of the heart than she initially appears to be.

Adam Pellerine turns the minor role of a butler into a scene-stealing part, not only with his command of language but also with his reactions to the silliness around him.

Sauder’s serious, practical Isabelle starts intentionally quiet and diffident in this upper-class world, but comes to life during the action, and she’s a moving figure by its end.

But it’s Costantini who drives the show, defining the identical twins vocally and by the way he holds himself. Frederic speaks slower, almost drawing into himself, while the impetuous, self-confident Hugo is brash, bites his words and is more confrontational with others. The dual performances, rich and complementary, help make this a memorable production.

Jackie Chau’s set is effectively airy, and Erika Connor’s costumes, especially the ball gowns, are a delight. It’ll be hard to forget Gould’s red dress, with an added bow so large it could cover the CN Tower.

Williams’s The Rose Tattoo, in which a troubled widow decides to take a romantic gamble, starts more slowly than the Anouilh. Serafina Delle Rose (Tiffany Deobald) loves her truck-driving husband passionately but is unaware of his affairs and that he’s a smuggler. When he’s killed, she mourns for three years, protecting both his memory and the honour of her daughter, Rosa (Lee Ann Ball), especially when a young sailor (Jack Everett) appears in Rosa’s life. Finally made aware of her husband’s philandering, Serafina starts to trust her own feelings for Alvaro (Warren Macaulay), another Italian truck-driver and a man who reminds her of her dead husband.

When Alvaro appears on the scene, the show becomes more touching and engaging, with Deobald blossoming into a rich figure her scenes with Macaulay are among the production’s best.

Under director Todd Hammond, the female chorus of neighbours and gossipy outsiders — among them Buscema, Langille, Sauder and Kasey Dunn — shines throughout.