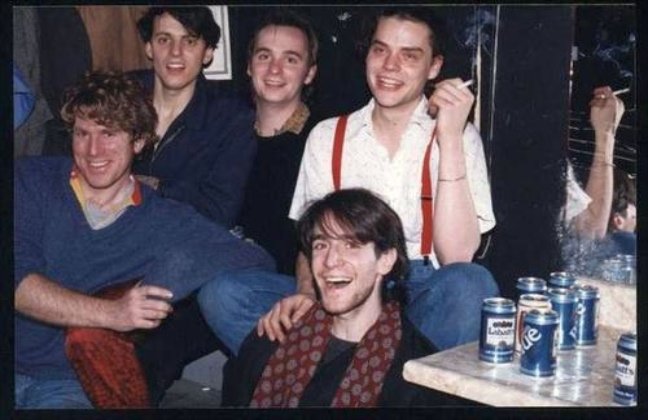 Toronto’s music community suffered a tragic loss today with the passing of Charlie Salmon, best-known as the guitarist and vocalist for the progressive jangle-rockers Plasterscene Replicas. He also played with a number of other Toronto outfits over the years, including the experimental post-punk band Fifth Column.

Just hours after learning of Salmon’s death, Replicas bandmate Stephen Stewart opened up to me about his friend. Stewart described an “immediate and proud affinity” when they first formed the band. The bond they shared was powerful, and it was reflected in the music. The band, he adds, were “inseparable and loved each other as brothers.”

Salmon had, Stewart said, suffered from and beaten leukemia of late. His was a brave struggle and he sometimes seemed bewildered at the complexity of the medical procedures he had to endure. But he beat cancer. Unfortunately, this struggle left him physically weakened and with horrific lingering physical discomforts. Salmon took his own life on the morning of November 20. He was 53 years old.

Best known for their landmark 1988 full-length Glow, Plasterscene Replicas were still criminally undervalued and underappreciated throughout Canada. Yet their influence, in particular Salmon’s deft songwriting and his potent delivery, is immeasurable.

A staple of the 80s Queen West scene where many acts found their voice, Plasterscene Replicas wrote and recorded some of the more genuine music of the time. That scene became saturated in the blink of an eye, yet Salmon stood out. Have Not Been The Same: The CanRock Renaissance co-author Jason Schneider noted of the band, “Plasterscene Replicas were a band Canada desperately needed in the mid-1980s.”

The singer’s poignant voice and sense of character showcased a maturity that was light years ahead of others. “Charlie Salmon’s songs appeared fully formed, combining punk’s energy with pure pop craftsmanship,” wrote Schneider. “On top of that, the band’s crowning achievement, Glow, revelled in a still-confounding source of Salmon’s creative spark that remains compelling to this day.”

To look around on the internet today though, you wouldn’t know it. From the outside, it is easy to laud a handful of scene-changers, those whose works have been immortalized in classic rock countdowns and best-of lists. To truly understand Salmon’s influence, you have to get personal.

Growing up in the suburbs of Toronto, I appreciated Queen Street from a distance. I knew of it because it was referenced to no end on a number of then-important radio programs I’d listen to, including CFNY’s All Request Breakfast. I’d wake up early to be exposed, hesitantly of course, to the Toronto I didn’t know. Punk threw up too many barriers and new wave was challenging in scope. But the Plasterscene Replicas and their standout track Things You Hold struck a powerful chord whenever it was played.

The song, and Salmon’s driving voice, leapt out of the speakers and invited me along for the ride. It was a song that forced me to stare a little longer down the 401 as I’d accompany my father on rides into the city. And there was a grace in his voice. Toronto and Queen West were better places because of Salmon. Bands like Plasterscene Replicas and voices like Salmon’s were warm, honest and inviting.

The band stopped playing together in 1989, but came together for a reunion show at the Cameron House in August of 2007.

If anything, Salmon’s death should force those who bear an affinity to influential Toronto rock to dig a little deeper through the crates and find the beauty that is often hidden, much like Salmon was. Talents like him are rare. Hopefully, his ability to engage listeners will not be.

“Charlie’s influence on the Toronto music scene is pervasive and powerful. It is unlikely that anyone who heard his work was left unmoved,” said Stewart.

“His creative drive, innovative technique and the sheer brilliance of his compositions caused him to stand out among his peers. He was looked up to and sometimes envied by his contemporaries and this sometimes left him befuddled because he was a bit of a reluctant idol.”

A musical memorial to Salmon will occur in the next few weeks.