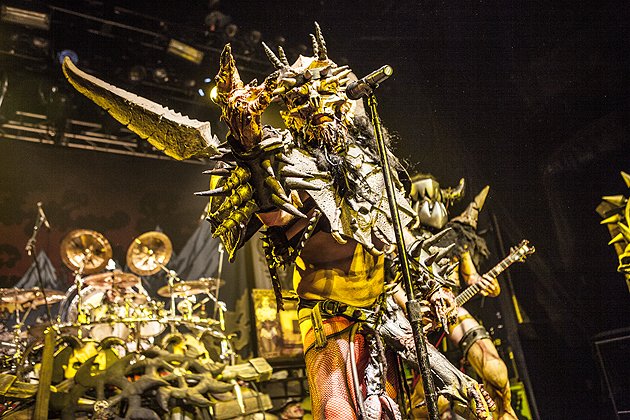 When news of David Brockie’s death began circulating late Sunday, March 23, it was tempting to view it as a sick joke. Brockie – who went by the name of Oderus Urungus – was the lead singer for shock rock thrash band Gwar, after all, and his stage show consists of gallons of spewing fake blood, ginormous meaty and horned prosthetic costumes, and the “crucifixion” of historical and religious figures.

But both police and Gwar member Chris Bopst confirmed the next day that Brockie has indeed passed away at the age of 50, found by his roommate in their Richmond, Virginia, apartment. Foul play is not suspected.

Formed at VCU art school in 1984, the satirical thrashers stood out in contrast to the era’s pretty-boy, image-focused spandex-and-hairspray hard rock acts. Gwar were hugely image-focused, too, but went as ugly as possible, adopting characters and fictional stories about their origin, speaking in English and made-up gibberish during interviews. (Urungus claimed to be an intergalactic humanoid barbarian from the planet Scumdogia and 43 billion years old.)

Their song Sick Of You from 1990’s Scumdogs Of The Universe was in regular rotation on MuchMusic’s Power Hour, and they were nominated for two Grammys: in 1993 for best long form music video, and in 1996 for best metal performance.

The rotating cast of musicians – of whom Brockie was the only constant – toured on a steady, near-annual basis, releasing 13 albums and building a career on their obscene, gory live shows, to which fans liked to wear white and stand near the front to get drenched in fake blood. Not everyone’s cup of tea, but undeniably entertaining. (Click here for a photo gallery and review of their November 2012 show at Sound Academy.)

Never quite of this world, Brockie has now returned to his.