The risky legal strategy in the Sammy Yatim case

James Forcillo is charged with both murdering and attempting to murder the person that he actually killed. 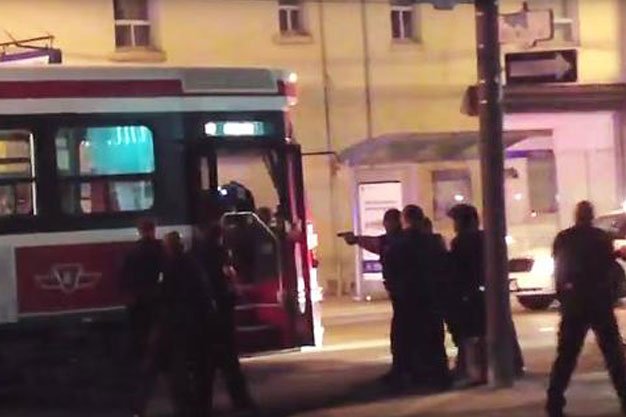 Given the profusion of evidence, the trial of James Forcillo for the killing of Sammy Yatim should – in theory – be a straightforward case. But matters of law are seldom uncomplicated, and Crown lawyers are taking a rather novel approach. Here we explain a curious aspect of their legal strategy.

So how ’bout that Constable James Forcillo. Is he guilty of murdering Sammy Yatim?

Well, we know he killed him. He fired nine bullets at close range, eight of which hit Yatim. No other officers on the scene discharged their firearms. Another did subsequently hit him with a taser – and you could raise all sorts of questions about that – but it’s not currently at issue, given that experts have testified that Yatim was mortally wounded by Forcillo’s first trio of shots. For him to be found guilty of murder, however, the Crown has to prove to the jury beyond a reasonable doubt that he either intended to kill Yatim or intended to harm him in a way that he would’ve known was likely to kill him and was reckless as to whether that might actually happen.

Well, will the jury find him guilty?

The safer bet with these things is generally in favour of the officer, especially given that Forcillo is arguing that he acted in self-defence. But remember, he isn’t on trial for just second-degree murder. There’s another charge at play: attempted murder.

How can that be possible?

On August 19, 2013, three and a half weeks after the shooting, the director of the Special Investigations Unit – the agency that looks into police incidents involving death, serious injury or sexual assault – laid a charge of second-degree murder against Forcillo. A year later, in late July 2014, the Crown laid a new charge of attempted murder on top of that, which baffled even those familiar with this area of law.

Why did they lay that additional charge?

For a while, it remained something of a mystery, leading to lots of interesting speculation. But when the case got to trial in October, the Crown elaborated: the second-degree murder charge relates to the first volley of three bullets that felled Yatim, while the attempted murder charge relates to the second volley of six bullets that came after a pause of about five and a half seconds.

So they’re arguing that he tried to kill someone whom he’d in fact already killed?

More or less. It’s a highly unusual legal approach, to say the least. Apparently, the idea is that the jury might find that Forcillo’s first three shots were justifiable – an act of self-defence – but that the latter six shots were not.

Veteran defence lawyer Peter Zaduk, who’s gotten off everyone from axe murderers to war criminals, doesn’t think so. “It sort of gives the jury an out,” he says. “If they want to be merciful to Forcillo, they might just convict him of the attempt murder. And in that regard, I would think that it is questionable strategy for the Crown. Juries all too often seem to acquit police officers no matter how strong the evidence is. [And] this case is stronger than most.”

Why take the risk?

It’s possible they’re not confident they’ll get a murder conviction.

“It undermines their case in a way,” says John Struthers, another experienced criminal lawyer.

Here’s a funny story: back in the late 90s, Struthers successfully defended Tyrone Edwards, who was charged with one count of first-degree murder and three counts of attempted murder relating to a shooting at Caribana in 1996. The specific details of the confrontation are a little convoluted, but Edwards fired seven bullets, with a pause between the third and fourth shots, and Struthers made the case that he acted in self-defence.

Struthers recalls that the jury wanted to know whether they could view each burst of bullets as a separate event: would they be allowed to determine that the first set of shots constituted self-defence but the latter set didn’t, “or if there’s a pause in the situation and the guy’s obviously no longer a threat, then can we convict him based on the remaining shots?”

The judge told the jury they couldn’t divide it up. And it was the same judge, Edward Then, who’s now presiding in the Forcillo trial.

Why did Justice Then tell the jury they had to regard it as a single transaction?

“Many people compare self-defence to being underwater running out of breath,” Struthers says – that is, the reaction is instinctual and not necessarily a conscious choice.

The judge adopted this view, telling the jury – as Struthers remembers it – that they could analyze only Edwards’s state of mind when the situation began. “You can’t say he was able, after two seconds of shots, to reconsider, apprise the entire situation, then figure out, ‘I don’t really need to fire any more.’ If he was panicking in self-defence, then it’s a global situation.”

That’s unfortunate for the Crown. But what if the circumstances are different enough that Then decides Forcillo’s charges do merit separate sets of analysis? How can you be charged with attempting to murder someone that you’ve already killed?

Wasn’t that a Seinfeld episode?

To convict someone of attempted murder, Ruby says, “you have to prove exactly the same mental ingredients as for murder, but you don’t prove the fact that someone died as a result.”

He should know: he represented Sam Ancio, the former reeve of Midland, Ontario, in the 1984 Supreme Court case that decided as much. (Previously, an accused didn’t have to specifically intend to kill someone to be convicted of attempted murder.)

So if Forcillo – unaware he had already fatally struck Yatim – meant to kill him with the second round of shots, that would be enough for attempted murder?

If it wasn’t in self-defence, yeah. That seems to be what the Crown is thinking.

And the jury could convict Forcillo of one charge or the other, or both, or neither?

But he hasn’t been charged with manslaughter.

Manslaughter is a lesser offence included in murder, and a jury can reach that verdict instead. Per the Criminal Code, “Culpable homicide that otherwise would be murder may be reduced to manslaughter if the person who committed it did so in the heat of passion caused by sudden provocation.”