NOW MagazineNewsRob Ford admits to struggling with alcohol “for some time,” will step aside

Rob Ford admits to struggling with alcohol “for some time,” will step aside 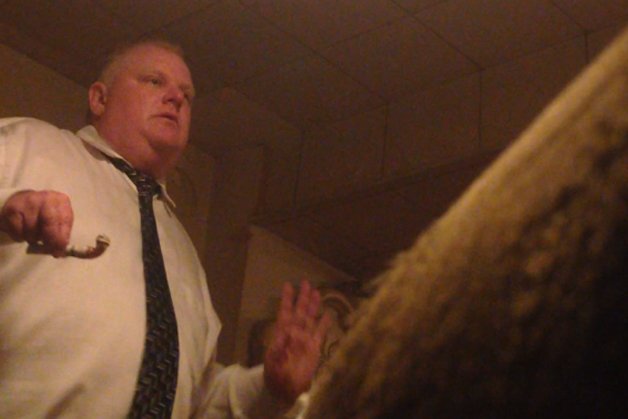 Rob Ford has admitted to struggling with alcohol “for some time” and is taking a leave of absence.

After revealing in November he had smoked crack while drunk, Ford has repeatedly denied having a substance abuse problem and has ignored calls from both friends and allies to step aside.

But on Wednesday more sensational reports about his disturbing behaviour surfaced, and the mayor is claiming he has decided to seek help. In a statement he said he had been struggling with alcohol “for some time.”

The text of the statement, which did not include an apology, is below:

“Tonight I want to take some time to speak from my heart to the people of Toronto. It’s not easy to be vulnerable and this is one of the most difficult times in my life. I have a problem with alcohol and the choices I have made while under the influence. I have struggled with this for some time.

Today, after taking some time to think about my own well-being, how to best serve the people of Toronto and what is in the best interests of my family, I have decided to take a leave from campaigning and from my duties as mayor to seek immediate help.

I have tried to deal with these issues by myself over the past year. I know that I need professional help and I am now 100% committed to getting myself right.

I love the people of Toronto. I love being your mayor and I hope you will continue to stand by me.

With the support of my family, friends, professionals and the people of Toronto, I will conquer this.

Please keep me and my family in your prayers during these difficult days ahead.

I just want to say to the people of Toronto that I thank you for your ongoing support and encouragement. I cannot tell you how much I appreciate it.”

Ford’s decision to take a leave came as news broke of yet another video showing the mayor smoking what appeared to be crack cocaine, and a separate audio recording of the mayor making crude sexual remarks, some of them about mayoral rival Karen Stintz, while apparently intoxicated.

According to the Globe and Mail, the video was taken early Saturday morning at Rob Ford’s sister’s house, while the Toronto Sun reported that the audio was taken at an Etobicoke bar on Monday night.

When reached by NOW Stintz declined to comment but issued a statement through a spokesperson demanding an apology from Ford.

“That a sitting mayor would make such shocking and bigoted remarks is disgusting,” the statement from spokesperson Karl Bauldauf. “Karen will address these comments directly in the coming days. Tonight, the people who support Karen Stintz are rallying behind her. In addition to seeking help, we hope for a full apology from Rob Ford, not only to Karen, but to all in this great city who expect more from their mayor.”

Many of Ford’s colleagues did not accept his decision to take a leave, and renewed calls for his resignation continue to pour in Wednesday night.

Here is what the mayor’s council colleagues and fellow candidates are saying:

“Like Torontonians across the city, I am deeply disappointed by these revelations of Mayor Ford’s behaviour. For the good of the city, I call on Mayor Ford to resign.” – John Tory, mayoral candidate

“I believe it’s appropriate and long over due for the Mayor to take a leave of absence to mind his health. However, he should go one step further and simply resign. Mayor Ford might partially rehabilitate his health with intentional efforts but thirty days is not going to cure a grown man’s racism, misogyny, homophobia and chronic tendencies to break the law.” – Councillor Kristyn Wong-Tam

“Rob Ford is not just a bad mayor. He is also a disgrace. Toronto can’t wait until October 27th. It is time for Rob Ford to resign, immediately.” – mayoral candidate David Soknacki

“I’m happy that he’s going to seek professional help now but this only confirms that Council was absolutely right to strip him of most of his powers last November. He’s been essentially irrelevant on Council for months. His mayoralty is over.” – Councillor Peter Milczyn

“[Ford] has absolutely no moral authority to be a member of council, never mind the mayor of our city… If he actually cared about anybody other than himself, if he really cared about Toronto he would resign.” – Councillor Josh Matlow

“I’m urging him to resign now. But do I though he should have resigned a year ago. Now it’s like talking to a wall. If he had any dignity he would have… done it on his own.” – Councillor Joe Mihevc