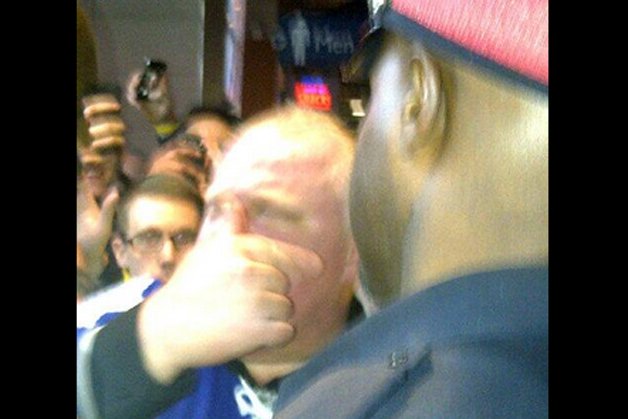 Despite the hockey game going on, Rob Ford was briefly the centre of attention at the Air Canada Centre Saturday night. But a representative for Maple Leaf Sports and Entertainment denies reports that he was ejected for being intoxicated.

The mayor was at the arena to watch the Toronto Maple Leafs’ final home game of the season against the Winnipeg Jets. As the contest entered the third period social media sites were flooded with reports that he had been ejected for being inebriated.

A Twitter account registered to MurphyBruno posted a photo of the mayor and a police officer, along with the message “He looked drunk and sweaty, lookked [sic] like staff wanted him out and he resisted.”

Another account registered to Cam Chubb sent out a photo of Ford surrounded by a crowd and apparently having an interaction with a security guard. The message was accompanied by the hashtag “#bangedup.”

In another video that apparently shows the same scene, the mayor is sweating and engaged in a heated conversation with someone. He can be heard exclaiming “bullshit!” as the crowd chants his name.

Ford wasn’t the only council member at the game. A video posted to Instagram by Eric Prime of the Fan 590 shows a crowd chanting “Four more years!” as a man who appears to be a security officer stands next to the mayor. Ford is holding a bottle of water and is seen saying something to Councillor Frank Di Gorgio, his budget chief.

As speculation swirled online however, it appears the mayor made his way back to his seat. James Mirtle, a sports reporter for the Globe and Mail, sent out a tweet that said “I can see Rob Ford sitting in his seat. He hasn’t been kicked out of the game. No more asking me.”

Shortly afterward, Mirtle reported that Ford left the game without a fuss before it was over.

A spokesperson for Maple Leaf Sports and Entertainment who asked not to be named said the mayor was not ejected.

“I don’t have the whole story but I do know that he was not ejected from the game this evening,” the representative wrote in an email to NOW.

The Toronto Star reported that security gave Ford a warning because he was “belligerent” after being denied entry to the ACC Director’s Lounge.

The mayor made his way back to City Hall, where NOW’s Jonathan Goldsbie reported his Escalade was still in its spot in the parking garage. Ford apparently spent some time in his office and then at around 1:30 a.m. City Hall security helped him to a cab. Shortly after he was spotted at the Muzik Nightclub.

This isn’t the first time that the mayor has caused a stir at the ACC. In 2006 he was removed from a Leafs game for being drunk and verbally abusive to a couple who had asked him to quiet down. A city councillor at the time, Ford initially denied even being at the game but a day later admitted he had had “one too many beers” and apologized.

In November, Ford repeatedly pledged he was done with drinking after admitting he smoked crack cocaine in “one of my drunken stupors.” He has been seen in public acting impaired several times since then. In January he was caught on video ranting in Jamaican patois at an Etobicoke restaurant. He later said he was drunk.

At the November council meeting at which he was stripped of many of his powers, the mayor dumbfounded his colleagues when he was asked on the chamber floor about his promise to never repeat the conduct that got him into trouble at the ACC in 2006.

“I said it would not happen again and it has never happened again at the Air Canada Centre,” he said, causing the gallery to erupt in laughter.

The Leafs lost to the Jets 4-2 Saturday night, effectively ending their hopes of making the playoffs.

With a report from Jonathan Goldsbie.