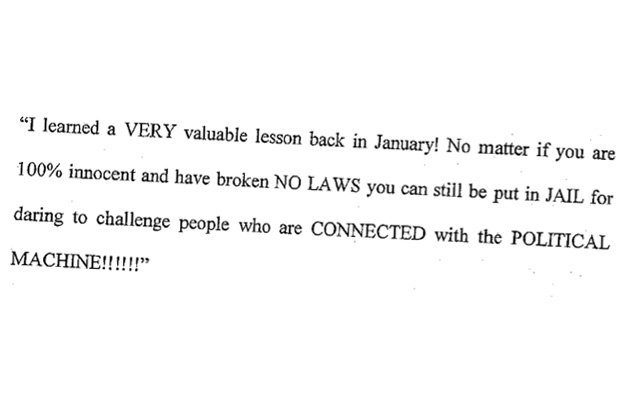 Scott MacIntyre is a fan of exclamation points

Back at the end of January, Scott MacIntyre sued Mayor Rob Ford – his ex-brother-in-law – for allegedly having been the mastermind behind a conspiracy to have him beaten up in jail. He alleged a fairly elaborate plot to seek retribution for threatening to tell the media about the Ford family’s history with drugs. And indeed, an Ontario Court justice did conclude in 2012 that MacIntyre had been assaulted in prison for having been “a bother to Mr. Ford,” though the judge did not assign blame.

Ford has now filed his statement defence, in which he denies pretty much everything that MacIntyre has alleged and even cites passages from Robyn Doolittle’s Crazy Town: The Rob Ford Story, a book he refuses to sign and quite likely will never read.

You can read the full document (a slim 11 pages) at the bottom, but these are the highlights:

The reason MacIntyre was sent to jail in the first place was that in January 2012 he barged into Ford’s house, made death threats against the mayor while on the phone with a police officer, and was found in possession of cocaine and heroin upon his arrest.

Why did MacIntyre break into Ford’s house? According to an agreed statement of facts presented at the resulting hearing, MacIntyre shouted at Ford,”You owe me money, your sister owes me money, if I don’t get it, they will kill me.”

This was first reported by the Sun in August 2013 and more recently included in Crazy Town.

And now Ford himself is citing it in his defence against MacIntyre’s suit. The statement says that “This Defendant [Ford] has no knowledge as to who the Plaintiff [MacIntyre] may have believed wished to kill him in 2012.” But it pointedly says nothing about why a convicted drug trafficker (who was arrested for drug possession that very day) was insisting that Rob Ford and sister Kathy owed him money.

As we predicted, MacIntyre’s comments in Crazy Town are being used against him. The book came out less than a week after he filed his suit against Ford and contains certain quotes that – contrary to MacIntyre’s statement of claim – suggest he is actually rather fond of the mayor.

Ford’s statement of defence cites both a (no-longer-visible) Facebook status of MacIntyre’s that was quoted in the book, as well as two Facebook messages that he sent Doolittle in response to her requests for an interview:

The Fords as a whole family treated me like one of their own and for the things that I did to them they were more than fair and it would be remiss for me to say any different… I paid my debt to society and have put this all behind me and wish you and all other media would do the same. Why don’t you do a story on what a great job Rob has done as Mayor of this City. And the money he has saved the tax payer!!!

The day before the book came out, MacIntyre told the Globe that “he sent the messages with the intention of deterring the journalist from contacting him. He said he believed that if he told Ms. Doolittle he only had nice things to say about the mayor, that she would leave him alone. ‘It was one of those off-the-cuff remarks, and I wish I’d never said it,’ he said.”

As Doolittle has pointed out: by citing her book, the mayor will have to argue in court that she is a respectable, credible journalist.

In his statement of claim, MacIntyre alleged that Mayor Ford’s infamous “murder rant” video was in fact about him, laying out the punishment Ford would like to inflict for his perceived misdeeds.

Nonsense, Ford’s lawyers say. This video “relates to a private, jocular discussion in the supposed privacy of a friend’s home where this Defendant was discussing and imitating, as a joke, the pre-match rant of a professional wrestler. This was in anticipation of a charity event that was contemplated in 2013 (long after the events in issue in the statement of claim) wherein this Defendant was to engage in a contest to raise money for charity with a well-known, retired professional wrestler. The Defendant is mimicking for the purpose of joking with friends at a private gathering (admittedly poorly) that professional wrestler in the portions of the Video referenced by the Plaintiff and incorporated into the statement of claim.”

From this, most have inferred that Ford’s lawyer was referring to his arm-wrestling match with Hulk Hogan in August 2013. But that was a publicity stunt for Fan Expo, not a charity event. In the video, Ford does say “If I win, I will fucking donate…” but he is not known to have ever been involved in a proposed charity fight of any kind.

Ford has also declined many opportunities to explain the video, as recently as his appearance on Jimmy Kimmel Live earlier this month. After showing the clip, Kimmel asked Ford directly, “Who are you talking about in that video?”

“You have no idea?” Kimmel asked, his voice getting louder.

“You have that many enemies that you don’t know which one this was?”

Ford then gave another bashful shrug.

This segment from Kimmel could get played in court.

Also named in MacIntyre’s suit are: Payman Aboodowleh, a friend of Ford’s who worked with him as an assistant coach for the Don Bosco Eagles, and who MacIntyre alleges was involved in the plot to assault him Aedan Petros, a former Eagles player, who MacIntyre alleges played a role in carrying out the attack and the Minister of Correctional Services, who employs the jail guards that allegedly facilitated the beating by placing MacIntyre in a cell block where he’d be vulnerable and by disconnecting security cameras that would have observed the incident.

None of the other parties have yet filed statements of defence. According to both court records and Ford’s statement, Petros does not yet have a lawyer representing him.