He usually offers half-assed apologies, so this was a pleasant surprise. 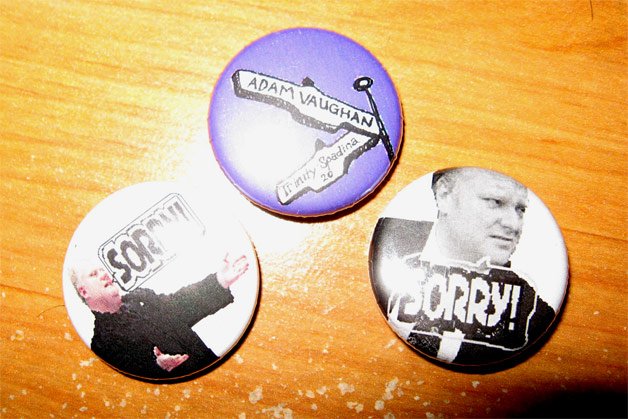 Just before 10 am on Tuesday, Councillor Rob Ford said he was sorry. This was not the first time he’d had to apologize at Council, and it’s unlikely to be the last.

But in contrast to the previous occasion on which he was formally called to account for racist remarks, the ex-mayor didn’t get defensive. He didn’t haul out a No Frills flyer in a cringeworthy effort to justify himself.

Instead, and this was a change, Ford accepted responsibility for his actions. He didn’t actually acknowledge the specifics of those actions, which is typically a minimum for a meaningful apology. But he admitted he fucked up and caused hurt — and for an erstwhile narcissistic megalomaniac, this is not nothing:

I want to call to your attention the fact that I’ve taken time to go through the Integrity Commissioner’s report on a formal complaint lodged against me while I was mayor of this great city.

I’m aware of my hurtful nature of my comments and the fact that they’re absolutely unacceptable. I understand the concerns brought forward in the report, including the standards set out by the Ontario Human Rights Code.

Mr. Mayor, members of Council: I’m deeply ashamed of what I said, and I recognize that they bring discredit to both myself and Council as a whole. I wish to offer my heartfelt apology for my words and actions.

So for what exactly was he apologizing? Samuel Getachew complained to the Integrity Commissioner about two sets of infamous Ford comments: his St. Patrick’s Day 2012 tirade against a cab driver (whom he called a “Paki” while mocking his language) and his March 5, 2014, boast that “Nobody sticks up for people like I do, every fucking kike, nigger, fucking wop, dago, whatever the race. Nobody does. I’m the most racist guy around. I’m the mayor of Toronto.”

Because Integrity Commissioner Valerie Jepson reported that Ford “accepted the underlying facts” of the complaint, there’s no need for us to use the word “allegedly.” But Jepson did find that there was ambiguity as to whether the latter remarks properly fell under the jurisdiction of Council’s Code of Conduct, given that they were made “while among Mr. Ford’s personal acquaintances and arguably on his own time.” Rather than allowing herself to get bogged down in technicalities, then, she restricted her judgment to his taxi-bound slurs, which were made in the presence of his staff.

When approached with the complaint, Ford initially referred Jepson back to the statement he made upon his return from rehab in summer 2014, in which he offered a sort of blanket apology for everything he’d ever said and done. But she and Getachew found that to be insufficient for the purpose of responding to a concern about particuar conduct.

And so we arrived at the above mea culpa, which ably surpassed our very low expectations. It came seven years to the day after Ford’s reluctant apology for having said that “Oriental people work like dogs,” “sleep beside their machines,” and were “slowly taking over.” 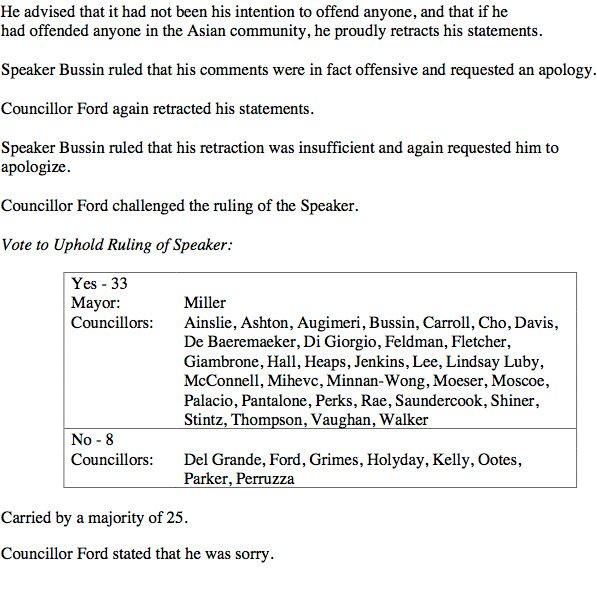 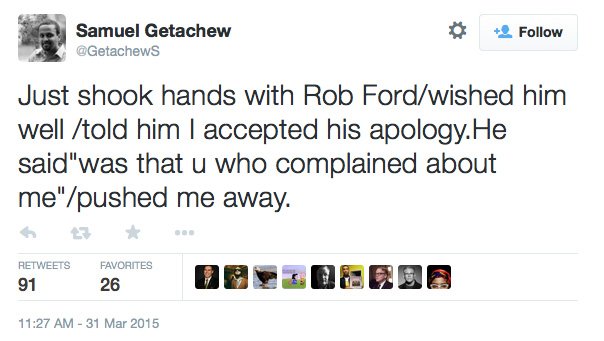