Rob Ford does a new thing 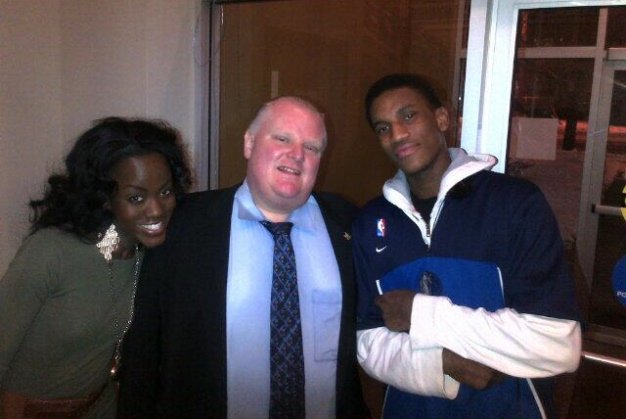 The thing with Rob Ford is that because of all the, well, what-have-you (crack-smoking, go-downs, slander, etc.) everything he does is fascinating. Behaviour that might seem just sort-of odd for anyone else becomes part of a pattern of consistent oddness for Rob Ford, all pointing to the conclusion that, well, at the very least, Rob Ford is a very strange, erratic, impossible-to-predict guy.

Apparently filmed yesterday at the West Toronto Church Of God on Wilson in North York, described online as a “very dynamic Church of God located on the west side of Toronto,” the video shows Ford swaying around and clapping his hands with a choir, in what could loosely be described as “dancing.”

Watching it, you half expect Ford to backflip down the aisle like John Belushi in that scene in The Blues Brothers. Anyway. Here it is:

This would be unremarkable, if not for the fact that it’s Rob Ford, and also because of the reports coming in from parishioners via social media that the mayor smelled like pot. See:

My nigga Rob Ford just showed up to the trap (aka my church)… Man smells like ganja pic.twitter.com/yBafRnMR4G

This nigga’s high af dancing in my church rn LOL , this is a joke b