Talk show host forces mayor to watch footage of his erratic behaviour, tells him he might need rehab 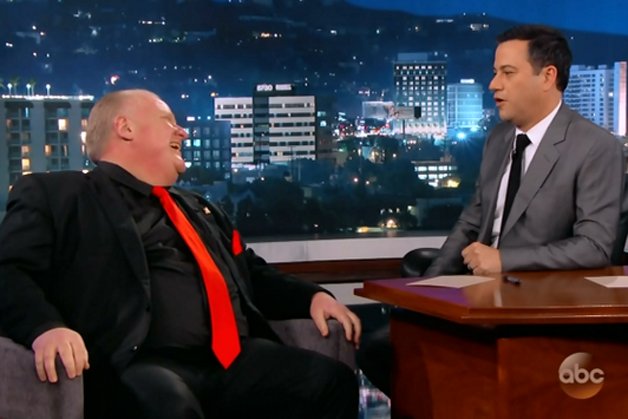 If Rob Ford thought a late night talk show would provide some refuge from the fierce criticism he’s faced at home, his hopes were dashed within the first minutes of his spot on Jimmy Kimmel Live.

Toronto’s mayor, dressed in a garish black suit and red tie, scarcely had time to get comfortable in his on-set armchair Monday night before Kimmel hit him with a scathing critique from back home. After a few soft questions about why Ford gives out his home phone number so liberally, Kimmel read out a sample of what he said were messages sent to him by Torontonians angry about their mayor’s appearance on the show.

“‘I hope you remember that clown you’re about to trot out is a very sick, very bad man. You know about Rob Ford’s domestic abuse, drunk driving, racism, homophobia, and inability to tell the truth, too, right?'” Kimmel read. “Is there any validity to any of these things?” he asked the mayor.

“Is that it? Is that all they got?” said Ford, smiling nervously.

“No, you got a lot of them,” Kimmel shot back, joking that Ford’s appearance might have broken a record for hate mail.

What followed was an extraordinary interview that unsettled the famously thick-skinned mayor. Kimmel never let his friendly demeanour drop, but repeatedly parried at Ford with uncomfortable questions.

The host alternated between friendly banter-calling Ford the “most wonderful mayor I’ve ever witnessed” and asking to take him on a Jamaican vacation-and holding his feet to the fire, prodding him about the crack video and his public spat with the Toronto police.

As Ford began to sweat, Kimmel reached out and daubed his forehead with a tissue. “I’ll auction this off on eBay afterwards,” he said.

In the second of three interview segments, Kimmel made Ford stand next to him at a video screen while he played footage of the mayor’ s erratic behaviour, including his so-called “murder rant,” the intoxicated appearance at the Steak Queen restaurant, and his collision with Councillor Pam McConnell during a council meeting. Ford smiled sheepishly but looked uncomfortable as the footage played. He was flummoxed when Kimmel asked him how he was threatening to kill in the rant video, and said he couldn’t remember.

Although the mayor told media that the goal of his Los Angeles trip was to promote the Toronto film industry, he made scant mention of movies on the air. He briefly noted that Toronto hosts the Toronto International Film Festival and said “I want people to come to Toronto, see how good Toronto is.”

Despite speaking to a primarily American audience, Ford reverted several times to the stump speech talking points he so regularly deploys at home. He boasted that he had finalized plans to build a subway, kept property taxes low, struck a landmark union deal, and asserted that he had saved the city a billion dollars (a claim that has been debunked by the press and high ranking bureaucrats).

The mayor also launched his now-familiar salvo at Police Chief Bill Blair, suggesting that the investigation the police initiated last year into his involvement with drugs and gangs was part of a plot orchestrated by his political rivals.

“I support the police like no other, but when they’re doing these, playing these political games, and they’re friends of my opponents… that bothers me,” Ford said, without naming Blair.

In the final segment Kimmel confronted the mayor about his substance abuse issues, which exploded into headlines around the world in November when Ford admitted to smoking crack cocaine in a “drunken stupor.”

“I do want to say that as a human being, you seem like a very nice guy,” Kimmel said. “I guess, if you are an alcoholic, which you know – listen, if you’re drinking enough that you can try crack in your 40s and you don’t remember it, maybe that’s something you might want to think about, like talking to somebody about.”

At the suggestion he was an alcoholic, Ford threw his head back and laughed. “I wasn’t elected to be perfect, Jimmy. I was elected to clean up the mess that I inherited and that’s exactly what I’ve done. Maybe you’ve never…”

Kimmel cut him off, and again suggested Ford might need to go to rehab. “It’s nothing to be ashamed of, and I think it’s a good example for other people who might be in a similar situation,” he said.

As the crowd applauded the notion that the mayor should seek help, Ford pulled out yet more stock phrases and said he was focused on the fall election.

“Talk is cheap and actions speak louder than words,” he said, his voice catching. “And uh, we’ll let the people decide on October 27.”

Shortly after the show’s taping, Ford’s official Twitter account sent out a photo of him at Los Angeles International Airport. “Thank you #LA see you again!” the message said.

But in a post-show interview with sympathetic Toronto Sun columnist Joe Warmington, the mayor’s brother, Councillor Doug Ford, revealed that Rob was “a little upset” about his debut interview on late night television.

Although Kimmel has mercilessly made fun of the mayor for at least the past three months, Mayor Ford professed to be shocked by his treatment on the show.

“In the background I could hear the mayor saying he was ‘set up,’ Warmington wrote.