Ryerson audience, other candidates give mayor the rough ride he deserves 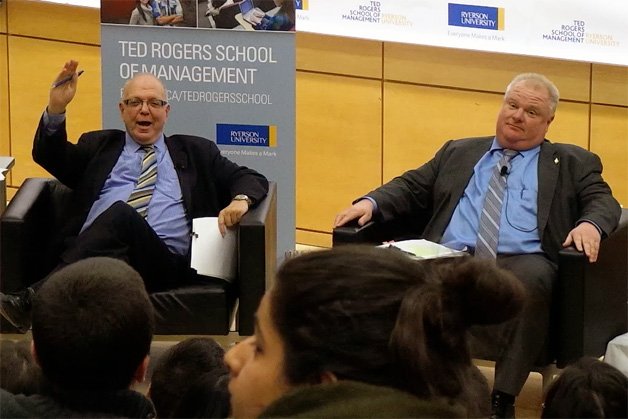 Last Wednesday evening, CityNews held a mayoral debate that made us question our faith in democracy.

Last Thursday evening, Ralph Lean held a mayoral debate that made us remember why we like it. Lean is a lawyer and legendary fundraiser for right-wing politicians at all levels of government. He is also an instructor at Ryerson and uses his connections to pull in big-name guest speakers for his class.

And so on March 27th, he rounded up Rob Ford, John Tory, Karen Stintz, and David Soknacki for a bout with each other, with himself, and with his students. He also opened attendance – but not the privilege of asking questions – to the public, who weren’t terribly receptive to his request for classroom-quiet decorum.

Olivia Chow declined to attend, conveying the message that she had a fundraiser that night. (A campaign spokesperson told the Star that in addition to a scheduling conflict, she had “concerns about the moderator’s neutrality.”)

You can watch the whole thing here, but these are the highlights, culminating with a video and transcript of the climactic war of words between Ford and the audience.

Soknacki: At the debate last night, I challenged him on that billion dollars. And I gotta tell you, the figures that today, that came forward, I still challenge those numbers. Those numbers are against budgeted numbers, they’re not against real dollars. That $1 billion savings exists only in the imagination.

Tory: I have a passionate belief in the good of public service. Those who hold public office must respect the offices they hold and the people who put them there. It is no secret that I supported many elements of Mr. Ford’s fiscal plan when he was first elected. But we simply can’t go on the way things are going. It’s not acceptable to have a mayor who often shows up late and sometimes doesn’t show up at all. It’s not acceptable to see the spectacle of a mayor who refuses to answer questions from citizens and from the media. And most troubling and unacceptable of all, a mayor who has eventually admitted multiple and continuing relationships with convicted criminals and gang types, the very people he has pledged to keep off our streets. … The simple fact is, that Mr. Ford no longer shows any respect for the precious public office that he holds. And now as a result, virtually the entire City Council, people from other governments, key figures say they cannot and they will not work with him going forward. And that means his ability to get results – on transit, on taxes, on jobs – is gone. And it’s not coming back.

Ford: You look at Europe, folks. There’s jets flying out all the time out in Europe on little island airports. Yet you don’t want jets.

Ford: Well, I don’t support corporate welfare. And I will stand up to the big, bad people at MLSE. I’m not gonna sit there and be a puppet and waste your hard-earned tax dollars.

Lean, to an absent Chow: I have a question for Olivia Chow, who is gonna be an empty chair there. I want to make sure that the questions that weren’t asked last night, we’re gonna ask them here. I have one for Olivia, that I may choose to answer. Somebody asked her on the debate- I don’t hold a grudge for someone [who] doesn’t show to my class, do I? But, no, it’s a legitimate question: I support outsourcing. My class knows where I stand on deregulation, outsourcing. City of Toronto outsourced its garbage, half of Yonge Street. Saved a good chunk of money: 11 million bucks a year. Last night, Olivia was asked, “Would you outsource the garbage on the other side of Yonge Street, because it’s worked?” She didn’t answer last night. If she did answer, my suspicion is the answer is “No,” ’cause they’re friends with the unions. She didn’t answer the question.

Lean, to Tory: You are – and I know you really well – the best private sector fundraiser, team player: Film Festival, United Way. Everything you’ve done in the private sector – and I tell it to ya ’cause you’re my friend – spectacular. Absolutely spectacular. I don’t know anyone who has a negative word to say about you. In the private sector. When you run for politics, you seem to be not as good. I watched the debate last night – you weren’t any good in the debate. In the scrum after, you were spectacular. There’s two different John Torys. I wanna see, are you gonna be able to deliver the John Tory I’ve seen in the private sector – that I’d stick my head up, “This guy’s terrific” – versus the John Tory I’ve seen in politics that hasn’t been as good? And sorry for the tough question.

Tory: I’ve had less complete success in politics [than in other areas]. But does losing an election, or more than one election, does that mean somehow that you are not able to replicate the good work that you’ve done elsewhere? I don’t think so, and I also don’t- I mean, the mayor’s taking joy in the fact that I lost. You’ll have the experience soon enough.

Lean: Let’s assume, for the moment, I accept your strong economic performance. Assume – that I’m not happy, but I’m okay with crack cocaine. Let’s assume – it’s a serious questions – that I’m not happy with videos of you being drunk. But, you know what? Private time, I’m okay. Tell me, the one hurdle I’ve gotta get over, you gotta help me with: you appear to hang out with drug dealers. Drug dealers, in my book, are really bad guys. They sell drugs to our kids, there’s shootings, they’re really bad people. How do I get over the hurdle: shouldn’t the mayor of Toronto have higher standards? Shouldn’t the mayor of Toronto and the chief of police be locking up these bad guys? That’s my question.

Ford: This sounds like Adam Vaughan and Gord Perks down at City Hall. You know what, this is, I – sh, Jones – I, I have produced results. You know I have. When you go to sleep at night, and every person in this room goes to sleep at night, they know their tax dollars are taken care of.

Man in audience: Answer the question!

Others in audience: Answer the question!

Lean: Let him finish the question. It’s a class, it’s a class.

Lean: It’s not a class? I thought it was a class.

Woman in audience: No, it’s not.

Man in audience: This is a debate!

Ford: No, you do what you want. I just don’t work like that. If someone’s not here to defend themselves, it’s not fair game, if you ask me. Right, or wrong.

Woman in audience: Answer the question!

Man in audience: Did you order your brother-in-law to be beaten?

Voices in audience: Let him answer!

Lean: Let him answer the question.

Ford: Okay. I’ve answered it as clear as possible. I know for a fact: we continue down the road, going back to the David Miller era. Or John Tory had his chance at Queen’s Park, had control of everything – fell flat on his face. Not once, not twice – he even heckles it. Are you taking lessons from Adam Vaughan on the side? Not once, not twice, three times. And Karen – I like Karen, she’s nice. But one day it’s LRT, the next day it’s subways. She’s fickle. You gotta have an idea and stick with it. And this is what I’ve done. I said I was gonna do – 90% of what I said I was going to do, I’ve done. The Land Transfer Tax, I tried to get [a] 10% [reduction] through – unfortunately, Karen voted against it.

Another man in audience: Answer the question!

Man in audience: That’s not the answer!

Ford: You know, it’s not the answer the left wing wants, but it’s the answer…

Ford: The lefties hate being called “lefties.” I know it hurts a soft spot here.