NOW MagazineNewsRob Ford: “I can do whatever I want”

Rob Ford: “I can do whatever I want”

Mayor denies being intoxicated at Leafs game, says questions about whether he uses drugs are "stupid" 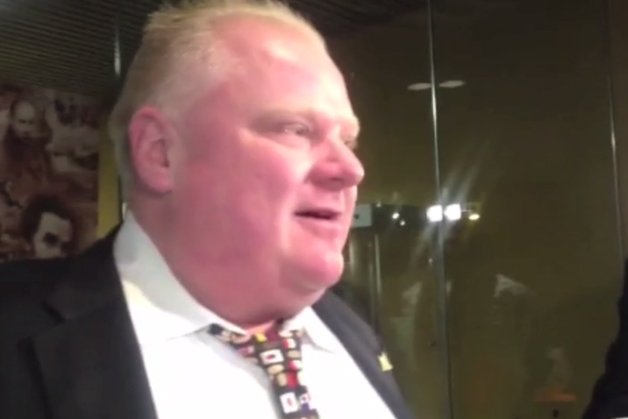 Rob Ford insists he was not intoxicated at the Maple Leafs game this weekend, and dismissed questions about whether he still uses drugs as “stupid.”

Numerous messages posted to social media Saturday night claimed that the mayor was intoxicated at the Air Canada Centre during a contest between the Leafs and Winnipeg Jets. After the game he made his way to his City Hall office, and stayed until about 1:30 a.m. when he reportedly got in a cab. Shortly after he was spotted at the Muzik nightclub.

After arriving for work at around 11:30 a.m. on Monday, Ford emerged from his office saying he wanted to “clarify a few rumours that are going around.” He told assembled reporters he wasn’t drinking on Saturday, or at the Blue Jays home opener on Friday.

He wouldn’t reveal what he was doing in his office late at night, other than to say that he comes back to City Hall “all the time.”

“I can do whatever I want. This is my office,” he said.

He said he decided to go to Muzik after “Z” (the club’s owner, Zlatko Starkovski) called and invited him.

“So I went by Muzik, and that was it. There’s nothing more to this story, guys. You’re trying to find something that’s not there. There’s absolutely nothing there,” he said.

The mayor denied an account of the evening from Councillor Frank Di Giorgio, who accompanied him to the game. Di Giorgio told reporters the mayor became “a little bit irate” when he was denied access to the ACC Director’s Lounge. According to Di Giorgio, Ford was adamant that he had been barred because last week he voted against giving Maple Leaf Sports and Entertainment $10 million to expand BMO Field.

MLSE spokesperson Dave Haggith said it is “absolutely not the case” that Ford was snubbed for his BMO Field vote. The lounge is invitation only and was full at the time, he said. Haggith would not comment on reports that Ford was loud and making a scene, and was asked to calm down by security.

Although video from Saturday at the ACC shows Ford saying “That’s politics! It’s bullshit!”, the mayor denied that he got upset. But he said it was still his “personal opinion” he was kept out of the lounge for political reasons.

Asked if he was under the influence of any drugs that night the mayor said, “No I wasn’t. Not at all.”

Ford, who admitted in November to smoking crack cocaine, became upset and ended the scrum when a reporter asked if he still uses drugs. “You guys ask stupid questions. It is a stupid question,” he said, and then walked back into his office.

Earlier on Monday, Di Giorgio fielded questions about the mayor’s state of mind during the game. He said he didn’t believe the mayor was intoxicated, but admitted he was “animated.” The councillor said he wasn’t qualified to determine whether Ford was on drugs.

“I never said he was totally fine, I said he wasn’t drunk,” Di Giorgio said. “You asked me whether he was high and I said I don’t know what people behave like if they’re high. I honestly do not know. I’ve never really been around anybody that’s high.”

“In my view he was not slurring his words. I looked into his eyes, he didn’t look to me to be someone who was, let’s say, in a different realm. I felt he was not intoxicated.”

The councillor said he only became disappointed with Ford after the game when the mayor vanished into the crowd. Di Giorgio had hoped he would accompany him to a Catholic community event later in the night.