NOW MagazineNewsRob Ford: “I held my own” on Kimmel show

Rob Ford: “I held my own” on Kimmel show 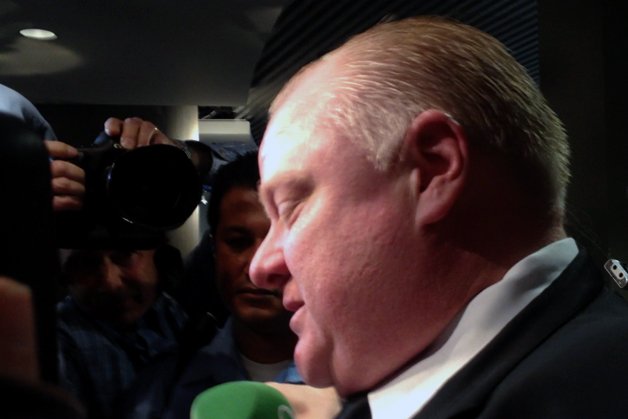 A day after being ridiculed during his appearance on Jimmy Kimmel Live, Mayor Rob Ford returned to City Hall Tuesday and declared he had successfully used his spot on the popular U.S. late night show to promote the city of Toronto.

“It went good. I tried to get my message out, I wish I had a couple more minutes,” he told reporters in a scrum outside his office.

Although Mayor Ford often looked uncomfortable on Kimmel’s Los Angeles set as the host asked him about his admitted crack cocaine use and made him watch videos of his past erratic behaviour, the mayor denied that the comedian had made a fool of him or that the interview could damage Toronto’s reputation.

He insisted that now-infamous videos of him appearing intoxicated were “old news” and that viewers were more interested in talking about his fiscal record than the crack scandal that engulfed his office last year.

“People are becoming numb to this stuff. They’re starting to get sick and tired of my personal life. They want to move on,” he said. “I want to see the ratings. A lot of people know Toronto and they know the type of mayor we have here, that supports business people, that supports the little guy, that keeps taxes low, that makes people accountable for every tax dollar.”

When asked about Kimmel’s suggestion that he might need treatment for alcohol addiction, Ford maintained he does not have a substance abuse problem.

“I don’t have any personal issues. We’ve gone down that road a number of times,” he said.

Ford has said that the goal of his trip to Los Angeles, which included attending a after-Oscars party the day before the Kimmel taping, was to promote Toronto’s film industry. The mayor said that he spoke to “the movers and shakers of the movie industry” and handed out at least a thousand business cards.

He did not answer questions about why he didn’t coordinate his visit with the Toronto Film Office, which has a representative in L.A. to promote the Canadian industry. On Monday, the city’s film commissioner said he was not involved in the mayor’s trip to Hollywood.