NOW MagazineNewsRob Ford launches re-election campaign: “I won’t back down”

Rob Ford launches re-election campaign: “I won’t back down”

Mayor asks public to support "the most open, honest, and hard-working mayor that this city has ever seen" 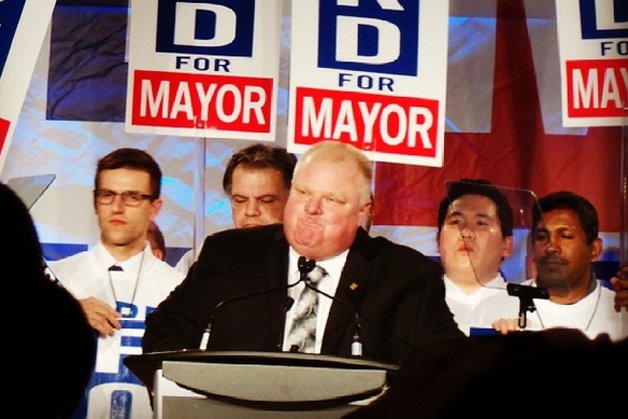 Rob Ford officially launched his re-election campaign on Thursday night with a defiant message, telling thousands of supporters at the Toronto Congress Centre that he “won’t back down” in his fight to retain his job as mayor.

After a drug and gang scandal made news around the world, Ford appeared re-energized to once again be surrounded by an enthusiastic crowd that recalled the wave of support that carried him into office in 2010.

After introductory speeches by boxing legend George Chuvalo and the mayor’s brother, Councillor Doug Ford, Mayor Ford entered the cavernous North Etobicoke convention hall in the middle of a procession that included a quartet of bagpipers and a human pyramid made by his nieces. Taking to the stage in front of an estimated 2,500 people, the mayor delivered a forceful populist speech laced with barbs against “elitists” and “special interests.”

In his 30-minute speech, the mayor framed the October 27 election as a struggle between “the real people of Ford Nation” and out of touch political class. “The people of Toronto know that I am just like them.”

The mayor registered for re-election on January 2, the first day he was eligible, but has yet to release a substantial platform. Instead of introducing new policy ideas, on Thursday he stuck to the issues that got him elected four years ago, declaring that he had “derailed the gravy train” at City Hall and repeating the false claim that he has saved the city one billion dollars. If re-elected he pledged that he would keep taxes low, build subways, and challenge “those who want to spend your hard-earned money without any consequence.”

Although Ford lied for months about the existence of a video that showed him smoking crack and has been criticized for regularly being absent from City Hall, he declared that if he wins the election Torontonians “will continue to have the most open, honest, and hard-working mayor that this city has ever seen.”

In his clearest allusion to the crack scandal, Ford conceded that there had been “some rocky moments over the past year.”

“None of us can go through life without making mistakes,” he said, expressing his gratitude to “the spirit of second chances.” A woman in the crowd shouted back “We understand!”

Following his admission to smoking crack last fall, Ford was under immense pressure to step aside and seek help. But the unprecedented controversy hasn’t hurt his popularity among his notoriously loyal supporters, who lined up by the hundreds to buy Ford Nation paraphernalia including bobbleheads, t-shirts, flags, and foam fingers. There was indication however that the turn-out was lower than the Ford camp had expected. The large convention space was at least half empty.

Among the supporters in attendance was Adele Pick, an elderly Etobicoke resident, who said Ford lying about his behaviour was “a minor thing.”

“If someone asked me if I did something that I did and I know it sounds good if I didn’t do it, I would lie too,” she said, as she waited to buy a bobble head. “It’s like a white lie.”

Cathy Jones, a homemaker from the Beaches, said she supports Ford because of his push to reduce the land transfer tax (which has not been successful). She said the media has blown the crack scandal out of proportion. “We’re all disappointed in that, but everybody makes mistakes,” she said. “That was done in his personal life. If he had stolen money from the taxpayers” it would be different.

While Ford still has the support of some voters, the turnout to Thursday’s rally suggests that few of his colleagues wish to be associated with his re-election campaign. Aside from Doug Ford, only three councillors-Cesar Palacio, Vince Crisanti, and John Filion-were spotted at the event.

Crisanti joined the mayor on stage for his speech, but both Palacio and Filion said they weren’t there to endorse Ford. Filion orchestrated the council vote that stripped the mayor of many of his powers in November, and said he attended because “you need to understand what you’re up against.”

“A lot of people who don’t support Rob Ford try to pretend that he doesn’t have a large loyal following, and that’s a mistake,” he explained. “You can’t underestimate the enemy.”