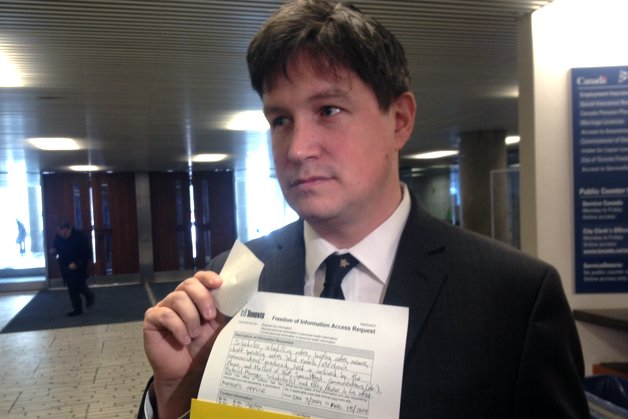 Rob Ford’s rival in the 2014 campaign has filed a freedom of information request to determine whether the mayor is breaking election rules.

Candidate David Soknacki is asking for the release of schedules, memos, and other communications by Ford and five of his staffers in order to determine whether the mayor’s office is being used as an unofficial campaign headquarters.

“We’re not doing it just as a fishing expedition,” said Soknacki’s campaign manager Brian Kelcey, who filed the request at City Hall on Tuesday. “We believe that there’s reasonable cause to suspect or at least inquire as to whether there are campaign activities taking place, or campaign conversations taking place in the mayor’s office.”

Council policy forbids any sitting councillor from using city resources for their re-election bid. The rule applies to council members’ staff, whose salaries are paid by the city.

Kelcey wouldn’t divulge any details but he suggested that he had received information indicating that people inside Ford’s office were improperly aiding the mayor’s re-election effort.

He’s specifically concerned about an email sent by the mayor’s official account on February 6 to promote the Ford brothers’ new YouTube show. Kelcey also mentioned Ford’s prep work for an all-candidates forum in Scarborough as well as frequent work-hour visits to the mayor’s office by Councillor Doug Ford, who is serving as his brother’s campaign manager.

“The public pays for a mayor’s office, and the public pays the mayor. And the public pays Councillor Ford to do public work, not to do private work,” Kelcey said. He acknowledged that it was an “unusual case” however, because under most circumstances it would not be out of the ordinary for a councillor to speak often with the mayor.

“I guess David Soknacki is getting a little nervous,” he said.

But the councillor did reveal that Integrity Commissioner Janet Leiper has advised the Fords not to use an office email account to promote the YouTube show.

“She gave us advice that she’d rather not see that done through the mayor’s office,” Councillor Ford said. “So we’re going to be following the integrity commissioner’s advice.”

The mayor’s spokesperson later confirmed Leiper received several complaints about the issue. The second batch of YouTube videos went up on Tuesday afternoon, this time without any notification from the official email account.

The freedom of information request asked for communications between January 3 and February 18 from or to the mayor, his chief of staff, scheduler, manager of protocol and events, policy advisor, and communications assistant.

Ford’s communications assistant, Amin Massoudi, confirmed that he is volunteering on the mayor’s election effort but not during office hours, which is permitted by council policy. Massoudi, who worked as Councillor Ford’s executive assistant before joining the mayor’s office, wouldn’t say whether anyone else on staff is also volunteering.

Massoudi acknowledged that Councillor Ford often visits the mayor but said that “every effort is made” to ensure that campaign issues don’t mix with city business.

This isn’t the first time that Mayor Ford has been accused of breaking election rules. In 2013, an auditor found that he committed several “apparent contraventions” during his successful 2010 campaign, including exceeding the spending limit by over $40,000 and incurring expenses before he registered as a candidate. The city’s audit committee voted two-to-one not to pursue the matter in court.