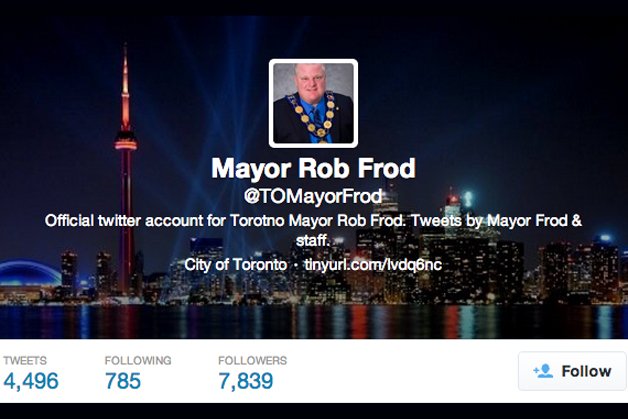 Update 8:54 p.m.: Twitter has advised Feren via email that the @TOMayorFrod account will be reinstated if he changes the account name, bio, and avatar/background within 48 hours so that it complies with their parody policy. The email confirmed that someone made a complaint about the account, but it did not say who. Feren intends to comply. “The changes might weaken the account’s punch but it will at least return,” he says.

The man behind a popular online parody of Rob Ford is hopeful he’ll soon be back poking fun at Toronto’s ripe-for-satire mayor.

Since last May, Richard Feren has been tweeting under the @TOMayorFrod handle, and racked up close to 8,000 followers with his deadpan imitation of the mayor’s official Twitter feed.

He was typically sharp this week while taking aim at Ford’s recent attempts to stop the Pride flag from flying outside City Hall during the Olympics.

“Off to our 5th non-homosexual Womens hockey Gold medal game,” Frod cheerfully declared on Monday after the Canadians beat the Swiss 3-1.

But then on Wednesday morning, for reasons still unclear to Feren, Twitter suspended his account. Online reaction to the move was swift, and the #FreeFrod hashtag was born within hours of Mayor Frod going dark.

“Save @TOMayorFrod! The parody account MORE USEFUL THAN THE ACTUAL MAYOR,” tweeted one user.

Feren says he’s appealed the suspension but Twitter has not yet explained its decision. He suspects it has to do with how similar the fake account is to the real thing: it uses the same avatar and background as the official @TOMayorFord, as well as a virtually identical Twitter handle. While most avid City Hall watchers have been wise to the fake for some time, it’s not hard to see why on occasion it has fooled people. Twitter’s rules prohibit impersonation.

“I don’t believe that it violates their terms,” says Feren, who works in theatre and film as a composer and sound designer. “But… they might have flagged it for being too lookalike, in which case I think they’ll unsuspend it if I agree to alter the avatar or something.”

That said, he’d rather not make too many changes.

“That is part of the prank,” he says. “The gag is based on it looking official.”

Feren started the account shortly after the allegations that Ford was smoking crack and hanging with gang members came to light last year and staffers began deserting the his office. As chaos engulfed the Ford his official Twitter feed was comically stoic, sending out messages about Gypsy moth sprayings and thanking residents for their birthday wishes.

To Feren the disconnect was the perfect fodder for satire.

But while @TOMayorFrod has been consistently amusing it reached another level when it turned serious. During the heavy July rainstorm and again during the December ice storm, Feren sent out useful information about the unfolding weather, including cleanup updates and names of city accounts to follow. Some people said they found the parody more helpful than the mayor’s official feed.

“I was waiting to see what the official account would do and it wasn’t really being very helpful.” Feren explains. He feels the serious tweets were satirical in their own right “because it was showing how not-so-helpful Rob Ford actually is.”

It’s not clear why, after nine months of activity, Twitter decided to take action against Mayor Frod. A representative of the company did not immediately return a request for comment.

The mayor himself said Wednesday he had nothing to do with the suspension. He told reporters at City Hall he wasn’t even aware of his online doppelganger.

“I’m sure there’s lots of parody accounts,” he said. “There’s only one Rob Ford, I can guarantee you that.”

The mayor does believe that Mayor Frod should be removed from virtual office, however. When asked if the account should be taken down he said, “If it’s not me, it should be.”

Dan Jacobs, Ford’s chief of staff, offered a different response. NOW asked him if anyone in the office had contacted Twitter about Mayor Frod. “We have absolutely no problem with any parody or satire accounts,” he replied.

Feren is optimistic that whatever the trouble is, it will soon be cleared up and the suspension will be lifted.

“I think it’s important to keep doing,” he says. “If the worse case scenario is that it becomes a little more obvious that it’s a satire, so be it.”