Mayor Rob Ford says he is clear of all charges in connection with the infamous crack video, but Toronto police. 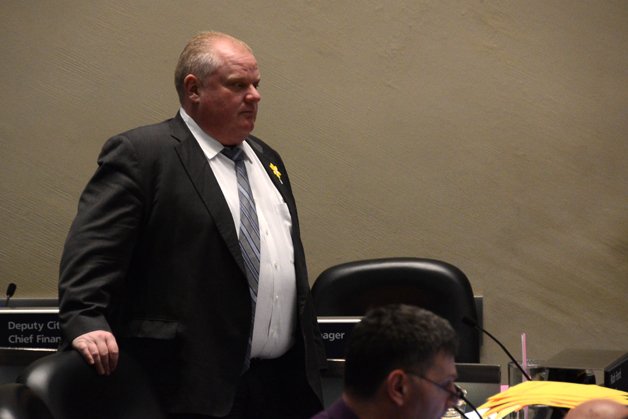 Mayor Rob Ford says he is clear of all charges in connection with the infamous crack video, but Toronto police maintain the investigation is ongoing.

According to several media reports on Thursday the OPP, which took over supervising the Toronto Police investigation into the crack video and Alexander (Sandro) Lisi’s related extortion charges last month, doesn’t anticipate laying charges against the mayor. The Crown reportedly feels there is insufficient evidence to proceed.

Lisi was Rob Ford’s friend and occasional driver and is currently facing drug and extortion charges. The publication ban on court documents related to Lisi’s ongoing investigation was lifted Thursday. They reveal threats allegedly made by Lisi to recover the video.

One communication between two men known in the Project Traveller case – the investigation that first uncovered the crack smoking video – claim Lisi said he would “run through all [their] houses” with “all the Toronto Police.”

Another communication, intercepted before the Project Traveller raids, says “the hood” would be raided soon and that Rob Ford is “going mad.”

Independent of the release of the court documents, the OPP reportedly scaled back their oversight role yesterday over a disagreement with Toronto police about who was the victim of extortion – the alleged drug dealer or Rob Ford.

A spokesperson for the Toronto Police Service, whose detectives launched the probe last year, said the investigation is still ongoing. He couldn’t say whether the case is still being actively pursued or merely being left open pending further developments.

A spokesperson for the attorney general’s office wouldn’t confirm reports that the case had stalled. “Police are responsible for investigating and laying criminal charges, and it is police who decide whether an investigation will continue or be concluded,” wrote Brendan Crawley in an email. “We do not comment on the status of police investigations.”

Nevertheless, Mayor Ford declared himself exonerated Thursday, telling reporters at City Hall that he had done “nothing wrong.”

“I knew the day was going to come that I’d be cleared and I guess today’s the day,” he said.

His brother, Councillor Doug Ford, thanked the provincial police and said citizens will now have the final say on the mayor’s behaviour in this fall’s election. “We want to thank the OPP for doing a proper job and again, we support the police,” he said. “The people have their opportunity on October 27 to decide if this city’s been running well or not. We feel it’s been doing great.”

“I’m happy for him,” said Frank Di Giorgio, the mayor’s budget chief, who predicted a lack of charges would help Ford in the election. “I think it will improve his chances a little bit if in fact his position is essentially… substantiated that in fact there was no chargeable evidence.”

But other councillors don’t believe the mayor is off the hook just yet. Councillor Adam Vaughan said it was premature for the mayor to say that he’s been vindicated.

“The [Toronto] police said the investigation is still continuing,” he said. “From my perspective that means he hasn’t been cleared.”

Vaughan, who is often the mayor’s most stringent critic, asserted that it doesn’t matter if Ford is charged because his political career has already been fatally wounded by the crack scandal.

“I guess there’s criminal and evidentiary issue to be resolved. From a legal perspective it matters. From a political perspective, he’s over, he’s finished,” he said.

Paula Fletcher pointed out that his record of erratic behaviour still stands.

“I think he wishes he was cleared,” Fletcher said. “What’s clear is that he was smoking crack, he was taking drugs, he was drinking and driving and probably using the most vulgar language any mayor has ever used here about his wife here at City Hall, and that he’s lied consistently. Those aren’t court issues…. But the court of public opinion will have its day.”

Councillor Michael Thompson, who is vice-chair of the police services board, said he was satisfied that the police had done their job and “at the end of the day we appreciate the work that the police have done and the conclusion that they’ve arrived at.”

But he added that “the police conclusion doesn’t absolve the mayor” of his admitted drug use and criminal associations. Thompson said he stood by council’s decision to revoke many of the mayor’s powers in November.

“I believe at the time council did the right thing. Given the opportunity to do it again I would do the same thing,” he said.

Ford’s rivals in the mayoral election had varying reactions to the latest developments in his sensational drug and gang scandal.

A spokesperson for David Soknacki said that the mayor has been a disgrace even if he’s never brought to court.

“Regardless of whether Ford is charged there is no doubt he has violated the public trust and brought shame on himself and his office,” wrote Supriya Dwivedi in an email. “Toronto deserves better.”

Other mayoral candidates were reluctant to speak on the issue however.

“I can’t comment on a police investigation that I don’t know about,” said Councillor Karen Stintz. “I’m trusting that the police did their job.”

She refused to answer when asked if she thought Ford escaping charges would help him win re-election.

“This [election] has never been a referendum about the mayor and his behaviour. This is about the city,” she said.

A spokesperson for John Tory, another challenger for the mayor’s seat, said his campaign would not comment on “an ongoing investigation.” But earlier in the day Tory released a 10-point code of conduct he pledged to follow if elected. The first pledge was to “respect and defend our laws, not break them.”