NOW MagazineNewsRob Ford threatens to walk out of scrum

Rob Ford threatens to walk out of scrum 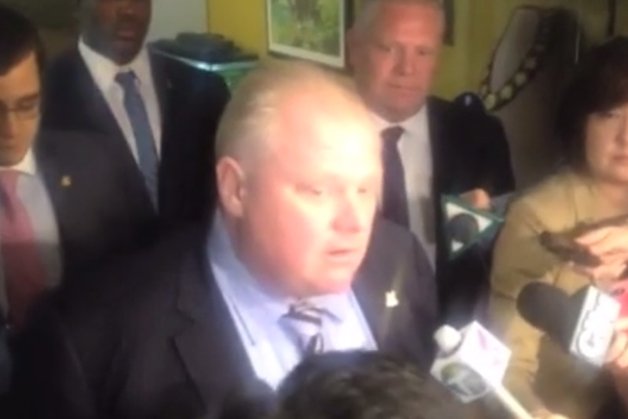 Rob Ford threatened to walk out of a media scrum on Monday when he was pressed about his position on transit taxes.

Mayor Ford was addressing the media following the registration earlier in the day of two high-profile conservative candidates, John Tory and Karen Stintz, who hope to replace him in the October 27 election.

The Ford campaign is already claiming that the two challengers want to impose so-called revenue tools to pay for transit, while casting the mayor as anti-tax.

“We’re not going to bring in revenue tools,” Ford told Newstalk 1010 on Monday morning. “I’m not going to sit here and trash the other candidates. You know, they’re revenue tool happy. And that’s all they talk about.”

But the mayor’s claims are contradicted by the fact that in order to pay for the Scarborough subway extension, he supported a 1.6-per-cent property tax increase that will last 30 years. Council approved the increase in July, and Ford was one of 28 council members who voted in favour of it.

When asked about that contradiction in the scrum, Ford at first did not respond. Councillor Doug Ford, his campaign manager, tried to get reporters to ask a different question.

When they simply restated the query the mayor started to answer and blamed council for imposing a steeper tax hike than he wanted. But when Toronto Star reporter Daniel Dale tried to point out his own inconsistency on the issue Ford turned around as though he was going to leave.

“If I’m going to get interrupted, then that’s it,” he warned.

He did stay to finish the scrum, however, and said he was confident he could beat his election opponents by running on his fiscal record. He would not answer questions about how he intends to pay for the subway line he is campaigning to build on Sheppard, which he says would be the first transit priority of his second administration.

“I got 90 per cent of my agenda through. Let’s just bring on the debates, let my record speak for itself,” he said.