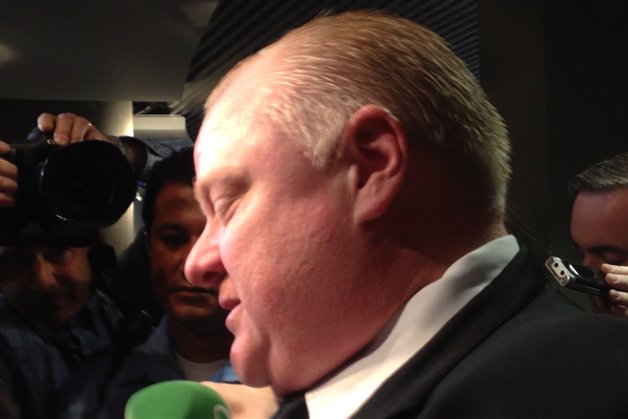 Rob Ford shocked his colleagues at City Hall on Wednesday when he was the lone vote against a council motion to have staff look into naming a street after legendary anti-apartheid leader Nelson Mandela.

He was also the only one who voted against a motion to congratulate Canada’s Olympic and Paralympic athletes for their performance at the recent winter games in Sochi.

Both votes were at odds with the mayor’s past actions. When Mandela died in December, the mayor called him a “true man” who would be missed around the world. In February, he launched a divisive and ultimately unsuccessful crusade to remove the Pride flag from outside City Hall and erect a Canadian one instead, claiming he wanted to show support for all of the country’s Olympic participants, not just those threatened by Russia’s anti-gay laws.

When asked about the pair of votes by reporters, the mayor’s chief of staff Dan Jacobs conferred with Ford and then told the press that the mayor had made a mistake.

“He voted in error. He meant to vote yes for both,” Jacobs said.

Ford asked council for permission to reopen the votes so he could be recorded in the affirmative, but they didn’t comply. Although council routinely reopens votes to correct a members’ mistakes, they usually do so immediately after the incorrect vote.

In this case council had already moved on to other motions, and some councillors said Ford had waited too long and a number of councillors had left the chamber. They said it would be unfair to those councillors to hold the vote again.

“As a courtesy to people who want to revote, you do reopen it. But the time elapsed between the request and the vote has been too long,” said Councillor James Pasternak, who moved the Mandela motion.

Pasternak said he was “astounded” that Ford voted against honouring the late South African leader.

“On one hand I was disappointed and shocked and on another hand well, maybe it shouldn’t have surprised me,” he said.

Councillor Josh Matlow was unsympathetic, and warned “don’t buy it for a second that he claims he made an error.” Matlow said that Ford, who is often an outsider on council, frequently votes against motions “out of spite” or because he opposes the councillors who move them.

“He knows exactly what he is doing, at least as much as he often does. And now he’s trying to get out of it because he’s been caught and he’s been called on it,” Matlow said.

Other councillors took Ford’s request at face value however.

“I trust the mayor’s word that it was an error,” said Councillor Karen Stintz, who is running against Ford in the mayoral election. “We’ll take him at his word.”

Councillor Denzil Minnan-Wong said by not reopening the vote council detracted from the commemoration of Mandela, who visited Toronto three times and was named an honourary citizen in 1990.

“Rob Ford was pretty stupid for voting against that motion,” said Minnan-Wong. “And I suspect in him trying to reopen it he was trying to correct his stupidity. But council’s lost the plot on this one. This shouldn’t be about trying to make fun of Rob Ford. This should be about recognizing Nelson Mandela.”

Lloyd McKell of the Mandela Legacy Committee, the organization behind the naming initiative, said he was satisfied that an overwhelming majority of councillors had approved the commemoration motion.

“I wouldn’t begin to even think what would be the mayor’s reason for voting against it,” he said. “Certainly 40 councillors I think, of all stripes, voted for it. So we think that’s a resounding statement from the city.”

McKell said he hopes that the city looks at renaming the stretch of Queen Street West between Yonge and University in Mandela’s honour. A school in the Regent Park neighbourhood already bears his name.

In an email to NOW, Jacobs said that Ford would ask to reopen the votes again later in the meeting, but by the time council adjourned on Wednesday night, he still had not done so.

On the way out of his office, the mayor reiterated to reporters that he had made a mistake and critcized his colleauges for not letting him revisit it. “Every single council meeting at least one councillor, two councillors get up and say ‘I made a mistake, I want it reopened'” he said. “Every single council meeting, they reopen it. Rob Ford makes a mistake, they don’t reopen it.”

Ford then said he had asked for a do-over “immediately after the vote.” When reporters pointed out it was in fact half an hour later, he became upset and walked away. “That’s the end of that,” he said, and got into the elevator.

His brother, Councillor Doug Ford, defended the mayor. When asked if he thought some people might be offended by the Mandela vote, he bristled.

“No one in this city supports the black community more than Rob Ford,” he said angrily. “No one. Bottom line. Zing. Done. Okay?”

UPDATE: On Thursday morning, Deputy Mayor Norm Kelly moved to reopen both votes so that Mayor Ford could be recorded in the affirmative. Council voted 34-9 to reopen the Mandela motion, and 38-5 to reopen the Olympic one. Both motions passed unanimously, with the mayor voting in favour. Councillor Josh Matlow left the chamber in protest because Councillor Ron Moeser was absent, and Matlow felt he had been deprived of his right to be on record for both motions.