NOW MagazineNewsRob Ford: “We love you Jim, we’ll miss you” 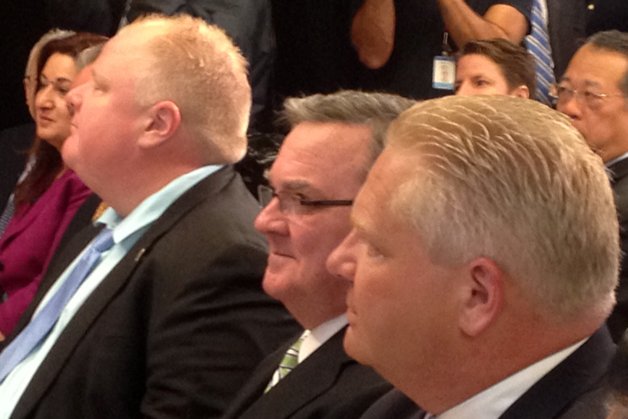 Flaherty, who resigned his government post only last month, died suddenly in Ottawa on Thursday. Before entering federal politics he served with the mayor’s father as a Conservative MPP in Ontario, and was a close friend of the Ford family. The closeness of the relationship was on public display in November, when Flaherty was asked about the crack cocaine scandal that had engulfed the mayor. Flaherty became so emotional he could barely speak.

After news of his death broke Thursday afternoon, Mayor Ford cancelled a scheduled press conference on city business. Not long after he arrived with his brother Councillor Doug Ford to speak in the member’s lounge at City Hall, looking visibly upset. At times during his short remarks he appeared to hold back tears.

Although Flaherty’s efforts to slay the deficit over his eight-year tenure as finance minister were often controversial, he was well-respected by politicians of all stripes. Messages of condolences from leaders across the country continued to pour in Thursday evening.

The full text of the mayor’s speech is below.

It is with profound regret that I’m speaking to the people today.

In this time of great sadness I wish to offer my deepest condolences to Jim’s wife Christine, and to his sons Galen, John, and Quinn.

Jim will be remembered as a relentless fighter and a champion for the people. He will deeply be missed by everyone who had the good fortune of knowing him.

Jim served on the provincial legislature with my late father Doug Ford, Sr. and was a close friend of the family for many many years. I can never thank him enough for his friendship and his loyalty through the years.

He was an honourable man, husband, father and politician who dedicated his life to his family and to the Canadian public service. As finance minister Jim had a stabilizing influence on the Canadian position in the international financial community. He kept the country on track in the most difficult of financial times. Canada would not be where it is today without the efforts of Jim Flaherty.

It is with deep sadness and a heavy heart that I say goodbye to a very special friend. We love you Jim, we’ll miss you.