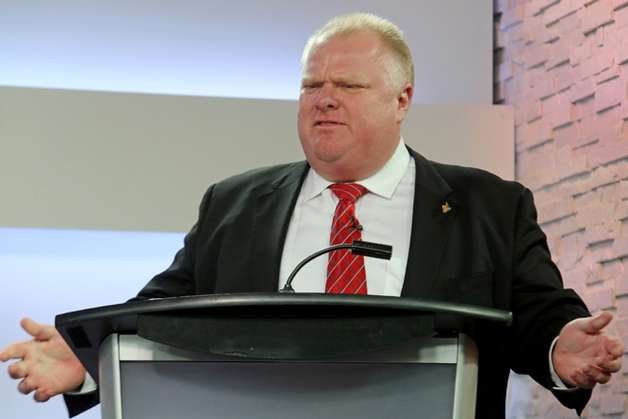 After Ford made the statement early and often at the first mayoral debate at CityNews studios fellow candidates called the mayor out on his mistake and the media questioned the claim in a scrum later.

The $1-billion figure is not his, Ford said, but the number provided by city Chief Financial Officer Roberto Rossini and Pennachetti.

If the number is made up, Ford exclaimed, then it’s the city’s beancounters the media should be calling “liars,” he said.

That prompted the unusual move to re-release a budget briefing note by Rossini to explain the number.

The difference is that, “Calling it budget savings is what it should be,” Pennachetti said in a scrum at City Hall. “How the mayor puts it, if he calls it a tax savings, it’s not right.”

The savings Ford is, in part, referring to are actually cuts to a host of city services and departments that account for part of the budget savings.

Ford has also included the elimination of the vehicle registration tax – $200 million – in his billion dollar claim. That figure, according to the note, is not part of the $972.4 million in budget savings.

There is also the problem of estimates in budgets.

Councillor Gordon Perks, who was also at the City Hall scrum Thursday, gave an example to show how a budget estimate does not a savings for taxpayers make.

He used the TTC as an example. If the TTC thought they would have “x amount of revenue and actually they had more revenue than they thought. Well, that’s not a budget savings. That’s not a cut. It’s not anything. It’s a wrong guess.”

He also said “taxpayers pay a lot more now than they did four years ago.”

Pennachetti said over the course of Ford’s tenure, property tax increases have remained at an average of 1.9 per cent per year, which is comparable to increases under the previous David Miller administration.

However, taxpayers have also paid $30 million in user fees since Ford took office.

And then there’s the TTC.

At the CityNews debate both Ford and former TTC chair Karen Stintz, who is also running for mayor, danced around Olivia Chow’s questions about cuts made to transit, in particular bus routes.

During the debate, Ford explicitly said, “I have not cut one red cent from TTC.”

The briefing note says the TTC was cut to the tune of $74.2 million.

In an interview later, Councillor Shelley Carroll, budget chief during the Miller years, explained how the TTC was cut.

“Right off the bat in that first budget you may remember a huge outcry about cutting bus routes and cutting the hours,” she said.

She also explained how the Ford administration “quietly increased the loading standard.”

“For every 100 riders you put another bus on the road with another operator,” she said. “If you just don’t, people just bunch up.”

Chow asked Ford at the debate what he would tell a mother and her kids who were left out in the cold because of his cuts to the TTC.

Like many things that Ford says, his response was a practiced piece of fiction: “You know the truth. I haven’t cut the TTC.”