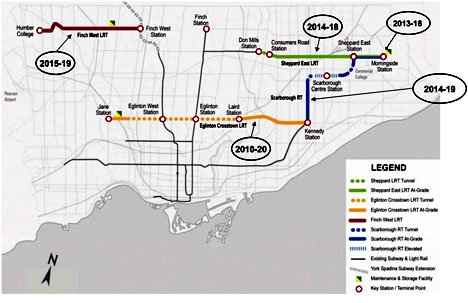 The first line of Toronto’s LRT network to be completed won’t be done until 2018, four years later than initially projected under the Transit City plan Rob Ford cancelled.

The Sheppard East LRT was originally intended to be in service by 2014, in time for the Pan Am Games in 2015, but that was before Ford scrapped Transit City on his first day of office and kicked off an 18-month battle at City Hall. That fight finally ended earlier this year with two council votes to revive the light rail network. Now, recommendations in a report released by Metrolinx on Tuesday project Sheppard will not be up and running until mid-2018.

“It’s a little frustrating, but we are moving forward on the plan,” said TTC chair Karen Stintz, who led the council uprising against Ford’s subway agenda. “Metrolinx is moving quickly so although we did lose some time on Sheppard, overall the plan will move forward.”

As she has been throughout the subway vs. LRT debate, Stintz was reluctant to blame the mayor for impeding progress. When asked if he was responsible for the setback she said, “I think we just have to look forward. The transit plan is back on track.”

Councillor Joe Mihevc, a frequent critic of the mayor and a champion of Transit City, didn’t hesistate to point the finger at the mayor.

None of other three LRT lines approved by council face significant delays. Metrolinx’s intended completion date for both Finch West LRT and the replacement for the Scarborough RT is 2019. The Eglinton Crosstown, which is already under construction, should be in service by 2020.

The report will be considered by the Metrolinx board on Wednesday, and if given the green light, go on to the provincial government for approval.

At a technical briefing on the report at Metrolinx offices Tuesday, agency chair president Bruce McCuaig said that the four-year holdup on Sheppard resulted in part because of the mixed messages coming out of City Hall, but also because the provincial government has since directed Infrastructure Ontario to take responsibility for the project’s delivery. A crown corporation created by the province, Infrastructure Ontario has project guidelines that are intended to maximize savings to the government, but also take longer to implement.

McCuaig wouldn’t speculate on whether the delay caused by Infrastructure Ontario’s involvement would have come about regardless of Ford’s intervention.

There are likely to be no additional costs to the city as a direct result of the construction delay, but McCuaig said that Toronto could be on the hook for the costs of revamping the deal with Bombardier, the company contracted to supply light rail vehicles to the new lines. Under the initial contract, Bombardier was supposed to start delivery 182 LRVs in 2013, but now the city will have nowhere to put them until 2015.

Metrolinx will negotiate a new delivery schedule with Bombardier once the province approves the new timelines, and the company could slap on a hefty penalty.

After missing out on the past two summer construction seasons, Metrolinx has had to compress its construction schedule to meet its target dates for the four lines. Despite the tight timeframes, McCuaig believes it’s feasible to have all four lines operational by 2020.

“The projects that we have are ambitious for 2020, but at the same time, people are impatient,” he said. “They want to see outcomes.”

Mayor Ford issued no statement Tuesday, but he has vowed to run again in the 2014 election on a promise to build a subway on Sheppard Ave. By the time Torontonians go to the polls in October of that year, there will likely be a contract in place to build the Sheppard LRT but no track will have been laid, raising the spectre that if he’s re-elected with the support of a new crop of councillors, Ford will once again try to reverse the LRT plan.

Mihevc doesn’t believe that’s likely however because a new LRV storage and maintenance facility on Sheppard will begin construction in 2013 and be well under way by the election. Because the facility will cost hundreds of millions of dollars, Mihevc thinks the city would be in too deep at that point to pull out of the LRT project without facing massive economic penalties.

Stintz also said that as far as she’s concerned, the LRT network is safe from Ford or any future pro-subway city council.

“We’ve had this debate. It’s survived two councils, and I think we need to build forward,” she said.

Highlights of the Metrolinx briefing: