The mayor's knack for wriggling out of trouble has been supernatural. Is his luck finally running out? 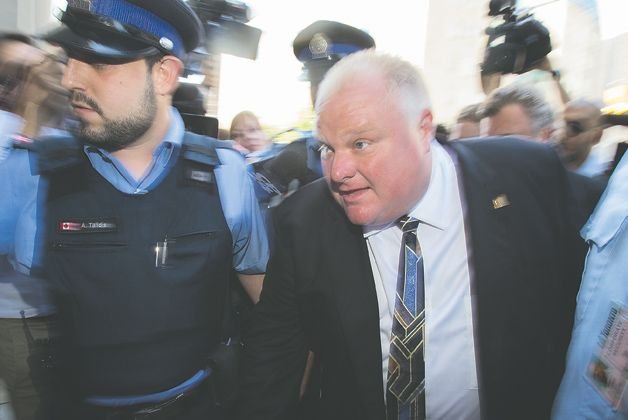 Mayor Rob Ford’s ability to persist as both a sitting office-holder and viable candidate for re-election has been picked apart and analyzed from every conceivable angle.

Beyond this, however, is another matter: his repeated escapes from accountability – including the very mechanisms that specifically exist to enforce it – which seemingly betray a supernatural degree of luck. Maybe there are political reasons causing those mechanisms to defer to his power, I dunno. It’s more comforting to believe it’s luck.

Last week, as more drama about the mayor’s rehab stint in cottage country unfolded, a new report emerged that police had tracked down and interviewed one of two men trying to sell the second video of the mayor smoking crack.

Lawyers for the mayor were also in court last week defending Ford on an appeal of the case that helped set the stage for his successful mayoral run – the defamation suit filed by Boardwalk Pub owner George Foulidis.

Herein is a brief history of Ford’s trials and tribulations and how he’s managed to get off the hook.

The allegation That while campaigning for mayor, then-councillor Rob Ford defamed Boardwalk Pub owner George Foulidis in remarks he made to the editorial board of the Toronto Sun.

The complaint Foulidis launched a $6 million libel suit against Ford, alleging he’d characterized council’s new lease arrangement with the pub as an example of “corruption.” “These in camera meetings, there’s more corruption and skullduggery going on in there than I’ve ever seen in my life,” Ford told the Sun. According to a transcript of the editorial board meeting that was entered in evidence at the trial, Ford added: “And if Tuggs isn’t, I don’t know what is. And I can’t accuse anyone, or I can’t pinpoint it, but why do we have to go in camera on a Tuggs deal? … And if that Tuggs deal doesn’t stink to high heaven, I…”

How Ford wriggled out of this one Foulidis had sued Ford as an individual rather than on behalf of Tuggs Inc., the company that owns Boardwalk – and the Superior Court ruled that Foulidis “failed to prove that he was the person, and was seen as the person with management control of Tuggs Inc.” In Justice John Macdonald’s opinion, the average person reading the Sun article wouldn’t have conflated the two in such a way that remarks about Tuggs and its deal with the City would necessarily be remarks about Foulidis. Macdonald also believed that Ford’s comment “I can’t accuse anyone, or I can’t pinpoint it” served to qualify his remarks as an expression of opinion rather than a statement of fact, and that if damages were to be awarded, they would be properly set at $20,000 – much less than the $6 million sought by Foulidis.

But At the Court of Appeal on Tuesday, May 20, Foulidis’s lawyers argued that Justice Macdonald erred when he found Ford wasn’t referring to Foulidis and when he found that the statements were not defamatory. With regard to the latter issue, lawyer Paul Pape blasted a lengthy paragraph of Macdonald’s written rationale as “almost Joycean in its stream of consciousness.” Ford’s lawyers, meanwhile, maintained that Ford was criticizing the conduct of city council, not Foulidis, and that such words were therefore fair comments in the context of a heated election campaign. Foulidis didn’t appeal the $20,000 damage assessment, though, meaning that if the appeal court finds in his favour, that’s how much he’d be awarded – presuming the court didn’t order a new trial instead.

The conflict of interest case

The complaint With pro bono legal assistance from Clayton Ruby, private citizen Paul Magder brought an application to the Superior Court of Justice charging that the mayor breached the MCIA when he spoke and voted on a motion to rescind an earlier council decision ordering him to repay money he’d solicited from lobbyists for his football charity.

How Ford wriggled out of this one He didn’t at first. The Superior Court agreed with Magder and Ruby that Ford had broken the MCIA and ordered him out of office as the law prescribed. But the Divisional Court, to which Ford appealed, overturned that ruling on a technicality. In a unanimous decision, the three-judge panel found that council’s original decision ordering Ford to repay the money was itself out of order and that the later vote to reverse it was therefore a nullity. The judges ruled that, under the City Of Toronto Act, council can only penalize violations of its code of conduct via a reprimand or suspension of pay – an order of monetary repayment isn’t allowed.

But The court decided to not award any costs to Ford, meaning that he had to cover the entirety of his own legal bill. The party on the losing end of Canadian civil cases is typically ordered to pay a substantial portion of winning side’s legal fees. In this case, however, the court decided [pdf] that because the original application was reasonable, because “significant and novel legal issues” got clarified, and because the appeal only narrowly succeeded, each party should have to bear its own costs.

The allegation That Ford’s campaign for mayor had breached several provisions of the Municipal Elections Act, including spending over the limit and taking advantage of a large private loan from Doug Ford Holdings, the Ford family holding company. (The law specifies that loans must be from “a bank or other recognized lending institution.”)

The complaint Residents Adam Chaleff-Freudenthaler and Max Reed brought an application for a compliance audit of Ford’s campaign finances to the Compliance Audit Committee. The committee, composed of three citizen experts, voted to proceed with an audit, and the auditors ultimately found scores of “apparent contraventions” of the law [pdf].

How Ford wriggled out of this one The committee voted 2-1 against commencing legal proceedings based on the findings of the audit. Because the committee provides no reasons for its decisions, we don’t know why they arrived at this conclusion or even on what criteria they based it.

But The committee did vote to commence legal proceedings against frequent Ford ally Councillor Giorgio Mammoliti, after an audit of his campaign finances turned up apparent contraventions. A special prosecutor eventually brought five non-criminal charges against the councillor, and the case continues to plod through provincial offences court.

The allegation That Mayor Rob Ford and his associates may have been involved in various illegal activities, possibly concerning drugs and an effort to retrieve a video of the mayor smoking crack.

The complaint On Saturday, May 18, 2013 – two days after news emerged of a video of Ford smoking what appeared to be crack cocaine – Police Chief Bill Blair asked Detective Sergeant Gary Giroux to open an investigation into the mayor, his office, and his friends. The investigation turned up suspicious activity, including interactions between Ford and pal Sandro Lisi that police allege were “indicative to that of drug trafficking.” Lisi was eventually charged with extortion for his efforts to retrieve the video, as well as a handful of drug offences.

How Ford wriggled out of this one After the mayor and his brother bombarded the police chief with accusations that he was insufficiently neutral in the matter, Blair handed oversight of the investigation to the Ontario Provincial Police in early March 2014. A month later, the Star revealed that the OPP and the Toronto Police officers conducting the probe strongly disagreed over “who was the victim of extortion – the alleged drug dealer who made the video, or Mayor Rob Ford, who is pictured in the video.” The same day, the OPP made it known it was stepping back from the case, and several outlets reported that Project Brazen 2 was coming to a close without having collected adequate evidence to charge the mayor. Toronto Police, meanwhile, insisted the investigation would remain ongoing but declined to clarify in what sense.

But On Saturday, May 17, the Globe reported that Giroux had “tracked down and interviewed one of two men who detectives believe were trying to sell” the second, more recent crack video. The paper called this “the first concrete sign in months that Toronto police are still actively investigating the mayor of Canada’s largest city.”