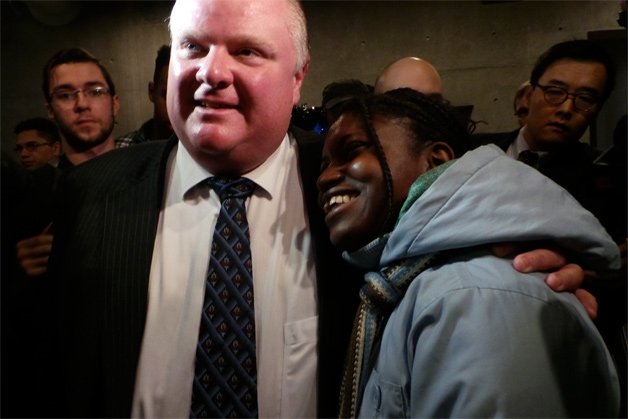 With more reports of debauchery

So now we know why Doug Ford took all day Friday to provide the evidence everyone was waiting for to prove his brother the mayor is in rehab. He was timing it just right to defuse another bomb dropped by the Star – a report quoting the mayor suggesting he has sex with “girls” in front of his wife.

Of course, there’s no way to know for sure that Doug was sitting on the details he promised on Rob Ford’s whereabouts until it was opportune so as to blunt the impact of the Star shocker.

But it fits the Fords’ MO to run media interference whenever there is another impending sordid report. It helps sow confusion. And a little confusion goes a long way for the 30 per cent of the population who bother to vote in municipal elections.

There was more news Friday too from the Project Traveller investigation into gangs and guns, the one that netted the Ford crack video last summer, to add to the media static. Turns out the home of City Hall lobbyist Tim Lambrinos, of the Adult Entertainment Association of Canada, the lobby group for strip club owners, was raided in connection with Traveller last April.

It was a false alarm according to Lambrinos, but in a twisted way not altogether completely out of context when it comes to the ongoing and interminable Rob Ford saga. We were all waiting for the dancing girls to enter this sorry tale weren’t we?

There have already been allusions in police court documents related to the arrest of the mayor’s alleged drug dealer Alexander “Sandro” Lisi to the mayor allegedly entertaining prostitutes. Drugs, booze, gangs, prostitutes, strippers and cocaine: that about sums up the life of Ford.

But back to the Star report. Maybe the mayor didn’t actually mean it when he allegedly said he has sex with “girls” in front of his wife Renata. According to the Star story quoting unnamed sources, the remark was made in front of his wife and a few of his buds – the aforementioned Lisi and alleged jailhouse enforcer Bruno Bellissimo. It was in March after a night out a couple of days after Ford’s appearance on Jimmy Kimmel. Maybe it was the glow of that celebrity moment that caused his trashy talk.

And maybe Ford didn’t actually mean it when he allegedly asked a third unidentified person among the group if the man wanted to have sex with his wife, who was allegedly sitting on the couch in the basement smoking a joint while all this was going on. “You can fuck her if you want in front of me,” Ford is alleged to have said.

Maybe none of it can be taken seriously because the mayor was obviously in another one of his drunken stupors. Maybe he’s not psychotic.

Question is: how long can this psychological beating go on before Ford’s council colleagues say enough? They’ve been reluctant to ask the province for the power to remove him from office. What are they waiting for, the cops? Or is it child welfare authorities that they hope will come to the rescue?

The stories of Ford in one drunken or crack-fuelled state or another have been coming so fast and furious – four in the last week or so – that it’s becoming clearer the mayor has a lifetime of mess to sort out. And that 30 days in rehab isn’t going to cut it.

Before the Star’s disclosure, word had already been making its way in political circles that the Fords had been hatching a plan to keep Rob in rehab – and out of the spotlight – until September and wheel out a new and improved mayor just a month before the vote.

In this way Ford wouldn’t have to bother with the rigours of a campaign – or policy questions that come with it – leaving the path clear to ride that redemption story to victory. Just another media strategy by the Fords to distort the truth for the masses.