Rob Ford’s sprint to the bottom 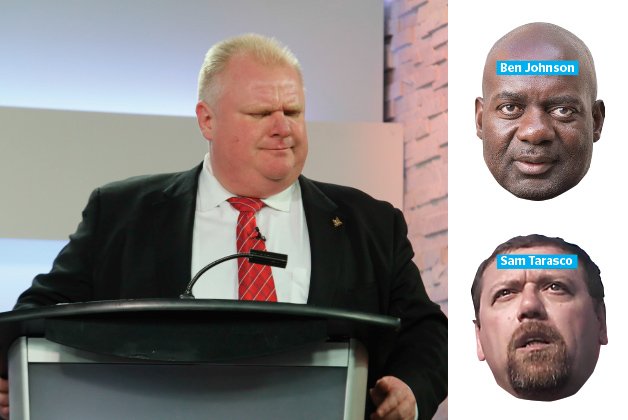 With Ben Johnson joining the mayor’s campaign, the men behind what are arguably the two biggest drug scandals in Canadian history have joined forces. The disgraced Olympic sprinter signed on to Rob Ford’s campaign Tuesday, April 8, along with actor Sam Tarasco, who had a recurring role on Trailer Park Boys.

While Ford famously admitted last year to smoking crack cocaine in a “drunken stupor,” Johnson shocked the nation in 1988 when he was stripped of his Olympic gold medal after testing positive for steroids in Seoul. Then in 1993, after testing positive again, this time for testosterone, he was banned for life by the International Association of Athletics Federations.

“I’m excited to have them on our campaign team, and we’re going to go to a few events,” said Ford as he stood outside his office with the two men. “It’s going to be a great campaign,” he said.

Before the surprise announcement, Councillor Doug Ford was the only known member of the mayor’s re-election team, aside from a handful of volunteers. Councillor Ford is serving as campaign manager, but Mayor Ford would not say what role Johnson and Tarasco will play.

“Everybody is going to help out in every way possible,” he told reporters.

Asked whether Johnson’s history might only serve to remind voters of his own drug use, Ford defended the former sprinter.

“I support Ben 100 per cent. We’ve all made mistakes in life. I’ve supported him from day one, and that’s the bottom line,” he said, and accused the reporter of getting “personal.”

Neither Johnson nor Tarasco would say why they agreed to support Ford. Asked whose idea it was to bring them together, Tarasco said it was the work of “Rick from Wild Wing,” an apparent reference to Rick Smiciklas, owner of the Wild Wing restaurant chain. Smiciklas, who last year shot a pilot for a reality series called Wing-Men, was also at the presser.

Early indications are that Ford’s rivals aren’t exactly shaking in their boots at the additions to Ford’s campaign. Shortly after the news broke, Supriya Dwivedi, a spokesperson for candidate David Soknacki, sent out a tweet. “Sprinting to the bottom,” it said.