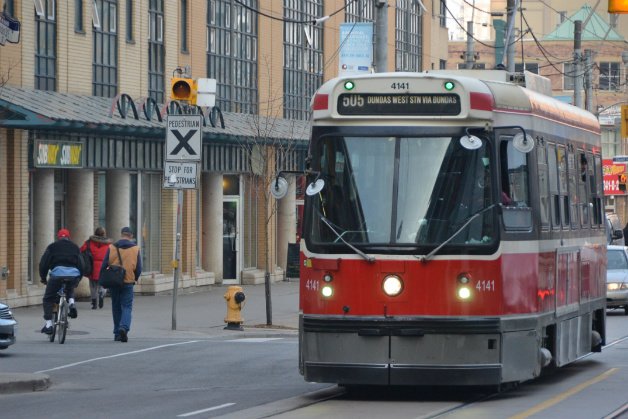 The TTC is standing by its streetcar fleet after Mayor Rob Ford proposed phasing out the rail vehicles.

On Wednesday, April 9 the mayor said he wants to eliminate the city’s surface rail fleet over twenty or thirty years, predicting he would be in office for “a long time.”

The mayor went so far as to promise that “I won’t get in a streetcar,” and said he’d like to replace streetcars on the busy King and Queen routes with buses.

Ford, who has yet to roll out any policy ideas that differ substantially from his 2010 campaign, also proposed eliminating streetcars during the last election. He later backed off the idea.

TTC spokesperson Brad Ross says the commission won’t take a position on proposals from any of the mayoral candidates, but he points out that government has already invested heavily in 204 new streetcars. The vehicles cost $1.2 billion, plus millions more for supporting infrastructure, and are expected to enter service on August 31 on the Spadina route.

It would be impractical to replace all 300 kilometres of the TTC’s streetcar routes with subways, but Ross says there are also many ways in which streetcars are a better option than buses. It would take three of the TTC’s regular-sized buses to match the capacity of one of the new streetcars, which can hold a maximum of 250 people. The rail vehicles also produce no on-site emissions and are quieter than buses, Ross says.

Although Ford (and many other Torontonians) has often expressed frustration at streetcars holding up traffic, Ross suggests it’s actually the other way around.

“Traffic causes streetcars to be delayed,” he says. “One car, making a left-hand turn … with one person in it is potentially holding up 200 people.”

“We’re moving 53,000 people a day on the 504 King car alone,” he says. “So if you put buses on the street to replace those, or people in automobiles, congestion one might argue would be far worse.”

Ford’s challengers moved to shoot down his proposal on Wednesday. “Once again, Rob Ford is making wild statements,” said John Tory in a written statement. “He said this in 2010 as well and did nothing. I believe in a mix of transit starting with building subways – specifically the Scarborough subway and Yonge Street Relief Line.”

David Soknacki said: “I have a better idea, and that’s to phase out Rob Ford.”

“In my city all forms of transportation have a place,” he said. “That is from pedestrian to automobile, included in that are buses, subways, streetcars.”

Olivia Chow, who according to most recent polls is leading the mayor’s race, does agree with Ford on one point. She too wants to see more buses on the streets. Last month she released a plan to use $15 million to increase rush hour bus capacity by 10 per cent. She has promised to cancel the Scarborough subway Ford pushed for however, and revert back to a surface light rail plan.