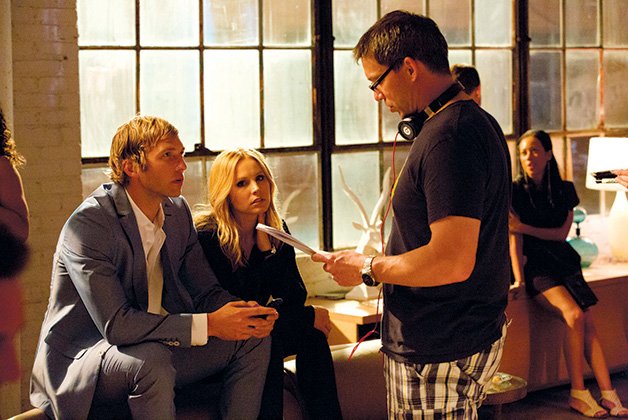 When the Veronica Mars movie opens on March 14, it will be exactly one year and one day since Rob Thomas and Kristen Bell launched their Kickstarter campaign to crowd-fund a feature spinoff of their beloved TV show. The pitch was for $2 million they wound up raising $5.7 million. When I find Thomas, he’s in Austin waiting on Bell to premiere their project at SXSW – and maybe do a few hours of press.

So, you’ve been busy?

The crazy thing was, the script wasn’t even written when we launched the Kickstarter because we didn’t know what the scope would be. Had we [stopped] at $2 million, it would have been like an Agatha Christie murder in a country manor, much smaller in scope. So I couldn’t really start writing until I had at least an idea of what the budget would be.

I was so naive about it. I thought I’d write a little update every couple of days and the money would roll in – and instead, [the campaign] occupied 12 hours a day, and the writing would be another six, seven or eight hours. I was barely sleeping. It’s been an exhausting but great year. I’m proud of the movie, proud of not having given up.

If the film’s a hit, what happens next? Are there plans for more Mars?

Certainly given our price point, if the movie does well enough, I think there’s a chance that Warner Bros. would be happy to make more. Kristen and I have both said that we’re game.

Would you use Kickstarter for the next one, or just have it funded by the studio?

Even if Warner Bros. gave us the money we needed, I would be tempted to still go back to Kickstarter and just say, “Our goal is one dollar. We’ll make the movie if we get one dollar.” And see how many people sign up, because I hope and believe the 90,000 people who signed up [before] would sign up again. Getting all those backer updates, feeling a part of it, being able to say it’s their movie and having some connection to the film – I think they liked it.

And I think we did a good job of servicing the backers. I wish T-shirts had gone out a couple months quicker, and I wish there weren’t still another thousand posters we need to have signed, but by and large I think the experience has been pretty good for them.

Rob Thomas on translating Veronica Mars to the big screen:

Thomas on the reaction to the movie’s first test screening [no spoilers]:

Thomas on the chances of spinning a movie out of his other cult TV series, Party Down: