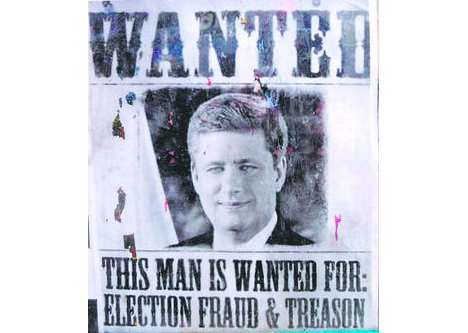 On the northwest corner of Queen and Spadina a wanted poster of Stephen Harper for crimes against democracy.

While authorities are busy investigating election calls, many people are uncertain about whether deliberately misinforming voters about the location of their polling station is illegal or just a “dirty trick.”

Be assured that such acts violate at least two sections of the Canada Elections Act and that substantial penalties may be imposed on anyone convicted. The combined effect of sections 281(g) and 491 (3) of the Elections Act make it an offence to wilfully endeavour to prevent an elector from voting. Also, section 482 states that every person is guilty of an offence who, by any pretense or contrivance, induces a person to refrain from voting or to refrain from voting for a particular candidate.

It’s alleged that other kinds of improper calls were made. The making of telephone calls that purport to be from the office of a candidate, but are really instigated by an opponent and are calculated to discredit the named candidate, would constitute using a pretense to induce a person to refrain from voting for a particular candidate, and thus would also contravene section 482. On the other hand, a call that leaked true information about a politician’s divorce would be a “dirty trick” but not illegal.

The maximum penalties for violating these sections of the Elections Act are severe: a fine of up to $5,000 and imprisonment for up to five years, or both. Moreover, a person convicted of such an offence may also be ordered to compensate anyone who has suffered damages as a consequence of the offence and to take any other reasonable measure to ensure compliance with the act.

We have to hope Elections Canada does a thorough investigation, identifies those responsible and prosecutes them vigorously.

Can elections be annulled if they were affected by such telephone intrusions? Any elector in an electoral district and any candidate may challenge the results if irregularities, fraud or corrupt or illegal practices affected the outcome. Such a challenge is made by an application to a superior court.

Anyone considering a challenge must act quickly: an application must be made within 30 days after the applicant first knew or should have known of the irregularity.

Peter Rosenthal, a lawyer with Roach, Schwartz and Associates, is adjunct professor of law and professor emeritus of mathematics at U of T.