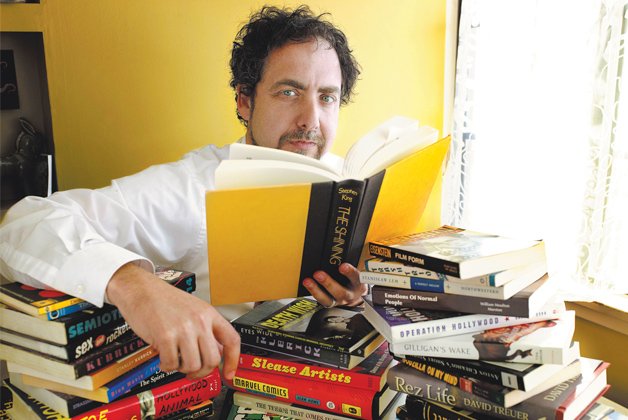 Movies about movies always run the risk of disappearing up their own asses. They tend to court an audience already familiar with their subject. But Rodney Ascher’s essay film about a group of people unhealthily fascinated with Stanley Kubrick’s The Shining makes a virtue of its narrowness.

With little introduction, Room 237 parachutes the viewer into its hermetically sealed world of cinephile obsession. Like the Torrance family stuck inside the snowed-in Overlook Hotel in Kubrick’s 1980 thriller, it ensnares the viewer. Its hypnotic images (mostly repurposed from The Shining itself) and unnerving soundtrack feel dangerously compelling.

“We didn’t want a preamble where we say, ‘The Shining was released in 1980 and lots of people have lots of ideas about it,'” Ascher explains over the phone. “We wanted to treat the audience as if they’re coming from the same place as our interviewees.”

Those interviewees are only disembodied voices, never appearing onscreen. One makes a pretty compelling case for The Shining really being about the genocide of native Americans. Another views it as Kubrick’s veiled mea culpa for staging the Apollo 11 moon landing footage.

“It gets really complicated really quickly,” Ascher says. “Do we only consider credible what we can confirm that Kubrick intended? For me, the fact that so many people were putting the movie under the microscope and discovering this stuff was kind of amazing and fascinating.”

Credibility’s beside the point. Room 237 is less about The Shining than it is about obsession – about being self-destructively drawn into something because it possesses some ineffable quality.

For Ascher, The Shining has “black magic baked into its DNA.” He came to Room 237 as something of a Shining obsessive himself, the film’s curious details (disappearing stickers, windows where there should be no windows) and unresolved plot threads (has Jack “always” been the Overlook’s caretaker? What does that even mean?) drawing him back again and again. It’s fitting that TIFF is hosting a limited run of Kubrick’s film, giving viewers a chance to test Room 237’s theories against The Shining itself and raising a new generation of potential fanatics.

Like the best movies about movies – Les Blank’s Burden Of Dreams and the Apocalypse Now making-of Hearts Of Darkness come to mind – Ascher’s film has a unique relationship with its subject, engaging with and refracting many of The Shining’s themes and moods. When I ran into him at a party at TIFF 2012, I was pleased to see that Ascher – stout, sharp-eyed, dressed in a plain black suit and topped with a shock of wiry black hair – seems to be actively developing his image as stand-in for Stanley Kubrick.

“The parallels started to present themselves very, very quickly,” Ascher says. “Both [Room 237 and The Shining] are about people trapped in a maze. Like The Shining, I wanted Room 237 to be a puzzle, but also kind of eerie, and kind of funny.”

Room 237 most impresses by capturing the pale, mounting terror of Kubrick’s film as it burrows further down the intersecting rabbit holes of its characters’ minds – the web of theory at once terrifying and absurd. And Room 237’s not just scary and endlessly fascinating, but a good deal of fun.

After all, all work and no play…