Does the skate phenomenon that excited T.O. need skin and camp to survive? 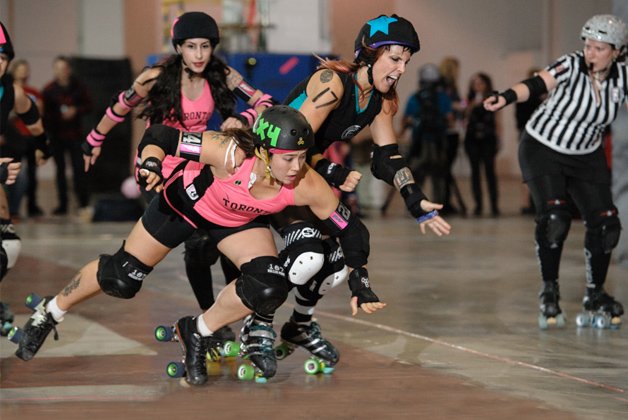 It was our strongest season ever, so you’d imagine back on home turf we would get a little love.

A full house at our game at Downsview Park October 19 would certainly have been a start. Toronto’s all-star roller derby team, CN Power, was freshly back from September’s Women’s Flat Track Derby Association’s playoffs in Oregon, where we placed 32nd out of 150 international teams.

We’d certainly faced down our demons in Oregon, lacing up against some of the strongest players in the sport – women like Atlanta steamroller Wild Cherri who launched me off my feet and sent me face-first into the crowd with a brick wall of a hit.

But here we were back in Downsview playing to about 300 ticketed fans, likely our lowest attendance in a year of low turnouts – down from sellout crowds of more than 1,000 at our peak in 2009.

So what happened? Is the honeymoon with roller derby now over, four years after the fledgling sport got the Hollywood treatment in Drew Barrymore’s Whip It? Or is there a more complex answer having to do with the fact that the derby is getting less campy and more athletic – and audiences want sexed-up entertainment in their female sports?

To be sure, most of us still wear makeup, and most uniforms in the Toronto Roller Derby league are tight, but themed team costumes are being overtaken by athletic outfits in breathable fabrics. Punny names like Tara Part and Lady Gag-Ya are still the norm, but cultural and rule changes are altering the game: it’s become more strategic, with blockers often trapping and holding opponents instead of yesteryear’s big collisions (although those do still happen if the moment presents itself).

The rules are complicated: blockers must stay within 20 feet of the pack, and jammers score a point for each opponent they pass but can only get a maximum of five each lap. As strategies evolve, a new rule set comes out each year, making the fine points hard to follow for casual fans.

Still, it’s frustrating for the skater-owned league to be in a financial slide when its all-stars have become one of the city’s most successful sports teams.

“People will drop hundreds of thousands of dollars on bad teams,” says the org’s Amie “Speedin Hawking” Sergas, a member of the league’s finance committee. “We have people playing their asses off and winning, yet we can’t back that in our city.”

At the University of Regina, Larena Hoeber, a prof at the Centre for Kinesiology, Health and Sport, thinks she can account for some of the slippage.

When women are portrayed more as spectacles than as athletes the sport attracts heterosexual men, she argues. The less flashy, the fewer men watch. “Women’s beach volleyball, to get audiences, emphasized the beauty side of it,” says Hoeber, noting that in some volleyball leagues women are required to wear bikinis, a push, she says, that also occurred in soccer but didn’t catch on. “In the Women’s National Basketball Association and sports like tennis, they’re really trying to emphasize the athleticism.”

To stay relevant in the long term, derby would do well to play it straight if it wants to avoid comparisons to sports like Lingerie Football, she says. “If you want a spectacle, you watch wrestling. If you’re hoping to emphasize it as a real sport, it unfortunately just takes time.”

Research, she points out, shows that most women still become fans through the men in their lives – the implication being that if sports organizers can tailor pitches to women, they have a better chance of building a loyal fan base interested in the personalities and skills of players.

One sports org that clearly grasps this is the Canadian Women’s Hockey League. They get 500 to 700 people at their games, and its audience, unlike Toronto Roller Derby’s, is on the upswing.

Commissioner Brenda Andress says her league is careful to pitch to women spectators and their families. “It’s affordable, fun and entertaining,” she says, noting that the CWHL’s ticket price is $10. (ToRD admission is $18, advance $12.) “It’s a very different sport than the men’s game. Ours is about speed, finesse and skill. You can bring your kids you won’t see fighting, and you will have contact with Olympic and national players.”

But this strategy doesn’t necessarily shed light on the roller derby dilemma, given the game’s strong roots in the queer community. Many female fans like the playfulness as much as the men do. If anything, going mainstream runs the risk of alienating our base – which could well explain some of the decline the league is experiencing already.

In the end, no matter how many spectators are cheering in the seats, the league plans to just going to keep rolling. Says Sergas, “If we can change ourselves culturally within the league to not have to play publicly, we’d all get to play the game more. I’m in my fifth year I don’t care if anyone comes to watch me.”