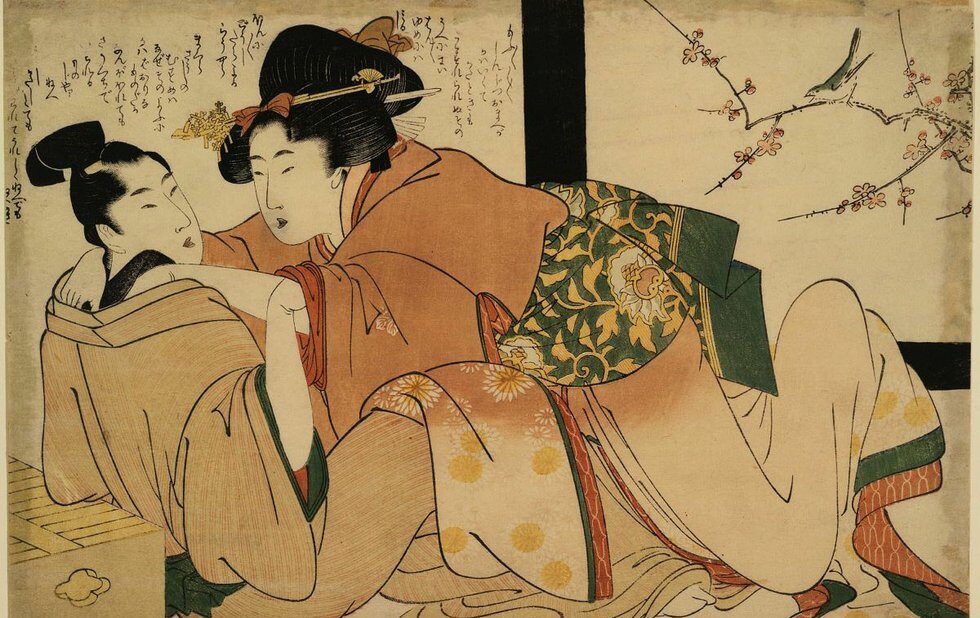 Kitagawa Utamaro's Courtesan And Client In Brothel hangs as part of A Third Gender.

We unthinkingly assume Western norms about sexuality are the whole story: we were born this way before gaining contemporary acceptance, homosexuality was labelled a sin or disease.

How wrong we are. Sexual expression is very much a social construct.

Edo-period Japan – from the mid-1600s to the late 1800s – had a sexual culture radically different from ours. A Third Gender, an exhibit of Japanese prints about wakashu, adolescent males attractive to both men and women, explores some of those differences.

Who knew that the ROM’s extensive Japanese art collection contained so many examples of eroticism and gender variance? Woodblock prints and illustrated books that are antecedents of today’s manga are complemented in the show by exquisite objects and large painted screens depicting busy towns.

Although many prints are elegant and graceful, they are not the pinnacle of ukiyo-e artistry. They’re far more interesting for the information they and educational wall text convey about life in Edo Japan. For instance, we learn how to identify wakashu, often indistinguishable from women in the prints except by the small shaved spot on top of their heads and the absence of combs and hairpins in their updos.

In the strict Confucian class hierarchy, identity was as much about social standing and age as gender. Women were separated into unmarried and married, prostitutes and court attendants. Adult men could have sex with wakashu and with women. Kabuki theatre offered more ambiguities: onnagata, male actors who played women, and wakashu who worked as prostitutes.

In her catalogue essay, curator Asato Ikeda says some images of same-sex activities have been excluded from the show because of concerns about age. When life spans were shorter, she explains, those who’d reached puberty, though not considered full-fledged adults, were expected to be sexually active. There was no concept of age of consent.

After the arrival of Western powers in the 1850s and 60s, modernization included an adoption of Christian morality. The wall text makes an important point: “This ‘normalization’ of a binary gender structure and heterosexual relationships occurred across the globe, leading to the disappearance of gender and sexual diversity in many cultures.”