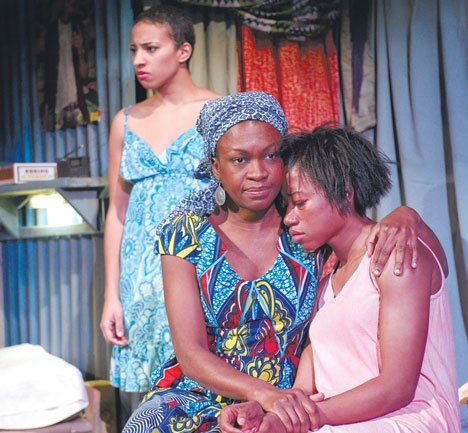 A congolese brothel operating at the height of a brutal civil war is the last place you’d expect to find a shred of humanity, but Lynn Nottage does exactly that in her play Ruined.

It helps that in this Obsidian-Nightwood co-production, the madam, Mama Nadi, is inhabited by Yanna McIntosh in a powerful performance that’s nuanced when it has to be and emotionally fraught when it counts.

Savvy Mama runs her business with an eye on profit. When her favourite travelling salesman, Christian (the excellent Sterling Jarvis), offers two young women for sale, she scoffs. They’re ruined, she says, meaning so brutally raped that they cannot have sex. But she softens, hiring Sophie (Sabryn Rock) as a singer and bookkeeper and hiding Salima (Sophia Walker) from her soldier husband.

Though Mama does what she can to keep the war outside the brothel at bay – the soldiers must forfeit their ammunition at the door no one can talk politics – its impact is ever-present, whether in the sound of bullets flying through the air or the haunted look in the eyes of her sex workers.

This play is absolutely of the moment, its content, sometimes too literal, covering blood diamonds, child soldiers, gang rape and wartime profiteering. Ruined uncovers a universe where being drafted into prostitution is a form of rescue.

To prepare the work, Nottage interviewed scores of Congolese. Salima’s devastating speech recounting her terrifying five-month ordeal as an army concubine sounds like the word-for-word account of a survivor.

But although the tension is almost unbearably high at times (you never know what’s going to happen when, thanks to Gillian Gallow’s clever set, you see a soldier thundering toward the brothel door), Ruined is not a horror show. Unlike Sarah Kane’s Blasted, it has no real desire to challenge. It’s an old-fashioned drama, with a huge heart and great characters brought to life by a superb cast under the direction of Philip Akin.

Rock is compelling as a woman who can barely walk but finds some joy in song, and Walker embodies the heartbreak of wartime brutality.

But the electrifying McIntosh is the stunner in this essential show.