NOW MagazineNewsSandro Lisi and the Chamber of Secrets

Sandro Lisi and the Chamber of Secrets 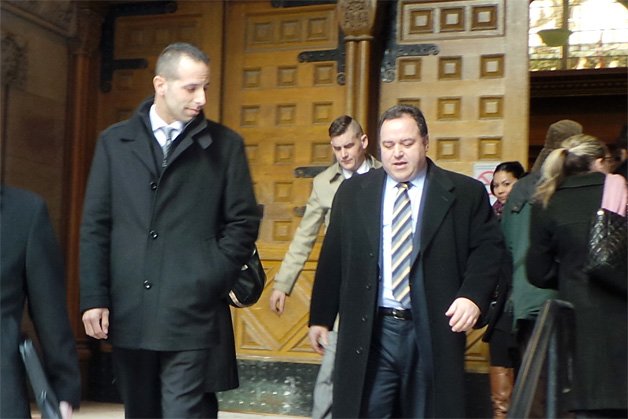 On Monday, we ran down the basics of the case. Today, we explain why we’re suddenly pregnant with much forbidden knowledge.

So you spent your week in court with Sando Lisi.

What can you tell us?

That seems like a rather crappy position for a reporter to be in.

Less than ideal, for sure.

So most of it’s secret?

Sort of, but not exactly. As a proceeding in open court, Lisi’s preliminary hearing was, officially, a public event. That is, anyone could walk in off the street and sit down in the courtroom and watch and take notes or sketch or whatever. A few school groups even popped in, ranging from elementary kids to what appeared to be university students.

Elementary school kids? Like, grades one to six? Did their teachers not realize what they were walking into?

Probably not, and the kids were quickly shuffled right out. Not that I can imagine many cases at Old City Hall that would be appropriate for that age group. Traffic court?

So it’s public. What’s the problem?

So you can’t say anything about it?

More or less. There are a few types of publication bans, and this is one pursuant to section 539 of the Criminal Code, which states that evidence taken at a preliminary inquiry “shall not be published in any document or broadcast or transmitted in any way.”

So what are you allowed to do?

I can confidently state that in-person, one-to-one conversations are fine. But that other person would also have to adhere to the ban.

That’s it? Can you email people about what you saw? Talk on the phone?

Under a strict reading of the law, I’d say probably not. But in practise, reporters regularly consult with their editors, lawyers, etc., often electronically.

This seems… paradoxical. Anyone can enter the court but can’t share what they’ve learned?

Yeah. There are competing principles at play. One is that, as a matter of course in a democracy, courts should be public and open to scrutiny. The other is that the accused has a right to a fair trial.

Let me back up: preliminary hearings are held to make sure that the Crown has sufficient evidence to take a case to trial. At prelims, Crown attorneys present pretty much everything they have, but not all of that might be admissible at a trial. The idea of a publication ban is to keep potential jurors from being prejudiced by evidence that might not actually be presented to them in court. And as the Canadian Judicial Council points out in its paper The Canadian Justice System And The Media [pdf], “since the purpose of a preliminary inquiry is to determine whether the Crown has a prima facie case (rather than to also hear evidence the defence may present to rebut the Crowns case), the hearing often doesnt provide a balanced picture of the evidence.”

It’s Latin for “at first glance” and essentially means “on the face of it.” In this context, it means does the Crown have what looks like a case.

So is Lisi gonna face a jury?

His lawyers have indicated that, if the matter proceeds to trial, he wants to be tried by a judge and jury. (As opposed to by a judge alone. There’s no jury-alone option.) That means the case would be bumped up from the Ontario Court of Justice to the Superior Court of Justice.

And the ban is lifted when the jury is chosen?

Nope! This type of publication ban evaporates at the end of a trial. (Though if a judge at a preliminary inquiry decides that the Crown’s case is so weak that there’s no point in going to trial in the first place, the accused gets discharged and the ban is immediately lifted.)

So the trial presuming there is one will also be quasi-secret?

No. Everything presented at trial will be entirely public and publishable, including things that are currently under a ban.

Look at it this way: jurors are supposed to base their decisions solely on the evidence shown to them in court. And there may be decent reasons for not showing them certain things in court. Until or unless a piece of evidence from a preliminary hearing is introduced at trial, that evidence stays under a ban until the trial wraps up.

When would the trial be?

I dunno. I’m guessing this fall at the earliest but quite likely sometime later.

How excited should I get?

Without giving anything away, I suspect you’ll find it compelling.

Dude. Violating a publication ban is an offence under the Criminal Code.

What’s the worst that could happen?

I don’t want to find out. (But actually, it’s a summary conviction offence, which means the maximum penalty is a $2000 fine and/or six months in jail.)

So you can’t even say what types of evidence are being presented at the prelim? Like, if there’s witnesses, audiovisual material, etc.?

We’re… working on getting that clarified. I can tell you that it was widely reported last summer that Rob Ford was served with a subpoena to testify.

What’s the point of spending a week sitting through a hearing you can’t report on?

That was just the first week! The hearing picks up for another five days starting April 13th, then could have even more dates scheduled for the following months.

You didn’t answer my question.

Oh, yeah, so there are a few reasons. One is that you can still report on the general context, environment, and scene of the hearing, so long as you don’t give away evidence. That’s why, for example, I can tell you that Sandro Lisi’s outfits became gradually more casual from Monday to Thursday, progressing from a crisp suit to a sweater and gold chain. Another reason is that, once an eventual trial verdict does come down, I can do a story on all the stuff the jury wasn’t allowed to know or see. A trial’s result sometimes hinges on whether a given piece of evidence was included or excluded by a judge at the prelim.

Oh, and we were able to get copies of the evidence so that the moment something is presented at trial, we can post it online right away.

Wait, you were given copies of the evidence? Why are you only telling me about this now?

You could just walk in there and get it?

In theory, it’s supposed to be that easy. But of course it’s not.

The media was advised to bring lawyers to court. Peter Jacobsen represented the Globe, CTV, Global, and Postmedia Ryder Gilliland represented the Star. Because of the sensitive nature of the material and a concern about possible leaks, Justice Mara Greene agreed with both the Crown and defence that it would be best to release the materials to the media through counsel. So she tasked Jacobsen with taking the evidence and making copies for both Gilliland and his own clients.

Reporters from outlets that didn’t retain lawyers NOW, the Canadian Press, the Sun, and Citytv each separately addressed Justice Greene and gave our names for the court record. Greene asked Jacobsen to make additional copies for each of us, which we picked up from his Yonge-and-Wellington offices on Friday afternoon. (We’ll be billed for only the copying costs.)

Ooh! Ooh! Can I come over and see what you have?

Please don’t. Justice Greene (who is super nice) was quite emphatic that we should be careful to whom we show the material. While she didn’t doubt that all the reporters in court grasped the importance of maintaining the publication ban, she expressed concern that others might not.

This all must be killing you.

Not as much as it’s killing you, I’m sure.