Sandro Lisi gets off

At 1:00 on Friday, Alexander "Sandro" Lisi looked out over Nathan Phillips Square from the elevated walkway above its eastern. 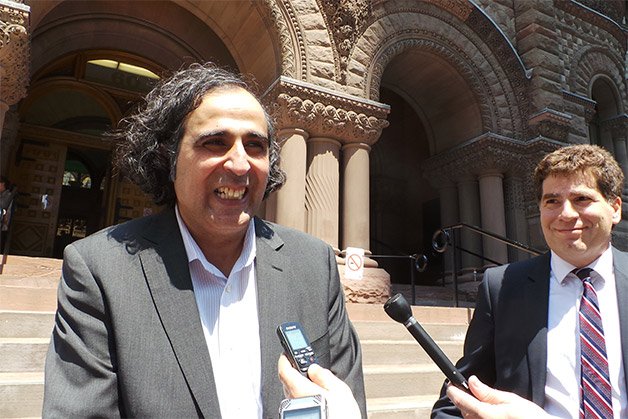 Sandro Lisi celebrates his acquittal on marijuana charges by smoking a joint (which he is now licensed to have).|An ebullient Jamshid Bahrami outside the courthouse with lawyer Jacob Stilman. "Are you happy

At 1:00 on Friday, Alexander “Sandro” Lisi looked out over Nathan Phillips Square from the elevated walkway above its eastern edge.

In front of him was City Hall, where his former friend, ex-mayor Rob Ford, continues to work as a councillor. Behind him was Old City Hall, the courthouse at which Lisi had just been acquitted of three marijuana-related charges stemming from Project Brazen 2, the larger police investigation into the former mayor. His co-accused, dry cleaner Jamshid Bahrami, also beat the charges he had faced.

To celebrate, Lisi smoked a joint. He had a medical license to do so and showed it to us to prove it. Clad in his trademark shades, he seemed relaxed. One trial down, another one on the more serious charge of extortion, connected to alleged attempts to get hold of the crack video left to go.

“I’d like to say thank you to my lawyers. They did a great job long hours and late nights,” he said on the courthouse steps, in his first-ever statement to the media.

And how do you feel? a reporter asked him.

“Relieved. And thank you to Justice Khawly. I think he made the right decision.”

Given a dramatic reading over two hours Friday morning, the judge’s 21-page ruling was ridiculously entertaining, filled with pulpy subheads and majestic turns of phrase. (We’ve embedded the whole thing below.) Perhaps taking a cue from the Fringe, he ordered that no one be allowed to enter the court once he started reading it.

“While scrupulously protecting their clients’ respective interests, both [defense] counsel wasted little time labelling the Crown’s case as Howard Hughes’s Spruce Goose,” he declared in one remarkable passage. “That like the brilliant, eccentric businessman and skilled aviator who spent a fortune to build a huge transport plane and who through sheer talent managed to lift off the water for a few hundred feet before retiring it forever, the Crown’s case was destined to a similar fate.”

Here’s how he put the matter’s Fordian context:

Lisi and Bahrami were the first two of only four people charged as part of the massive investigation into criminality surrounding then-mayor Rob Ford and his office. (There were also these guys, of whom you’ve probably never heard.) After a summer of trailing Ford and Lisi and witnessing them engage in behaviour “indicative to that of drug trafficking”, police set up an elaborate sting to get at Lisi via dry cleaner Bahrami to whom, police believed, Lisi was supplying drugs. In late August 2013, they sent an undercover officer to befriend Bahrami and try to arrange a purchase of Lisi-supplied weed from him. On October 1, the officer thought he’d succeeded at this, and police moved in and arrested them both.

The last was for 6.42 grams of the stuff that police found inside a fake can of Canada Dry ginger ale for comparison, that’s one-fourteenth the size of the giant blunt smoked at Dundas Square two weeks ago.

The Crown’s key witness was the undercover officer, Detective Ross Fernandes, and Khawly had “grave reservations” about his evidence.

Fernandes, for example, claimed that Bahrami was his primary focus and that he was oblivious to any larger purpose of the mission.

“Surely, even if he knew nothing else, the fact that he was now reporting and taking directions from much more senior officers [than usual] should have clued him to where the brass hoped this would go, namely from Bahrami to Lisi to potentially the Mayor,” Khawly wrote. “Yet that remained a foreign concept to him.”

The judge didn’t buy the Crown’s argument that Fernandes deliberately kept himself unaware.

“If so, this officer, like a monk in a hilltop monastery, kept the outside world totally at bay. No newspapers, no radio, no TV, no internet would come to sully his focus on his work as ‘Sean,'” the drug dealer he was pretending to be.

But eventually, after getting grilled by counsel, Fernandes admitted to being aware of the coverage tying Lisi to the mayor.

Lisi’s pot possession charge was easily brushed aside. Because police had found the fake can on the ground in the strip mall parking lot more than half an hour after detaining Lisi, they had nothing to prove it was his, other than that they’d found two similar (albeit empty) fake pop cans in his car. Bahrami’s cocaine charge was similarly circumstantial, since it was found in a back room at his business to which others might have had access, and could even have belonged to a customer.

At one point in the trial, Crown lawyer Kerry Benzakein described Fernandes’s undercover ruse as “a play being put on with investigative purpose.”

Running with this, Khawly closed his judgment: “With hindsight, given that the Project’s aspiration for the capture of big game never got off the ground, one wonders if Ms Benzakein had in mind Shakespeare’s play:

“‘Much Ado About Nothing.’“

In other words, police never managed to get Ford on anything, and all they had to show for their trouble was a handful of minor drug charges.

With all his wisdom, however, Khawly seems to forget that Much Ado’s chief antagonist is indeed apprehended at the end of the show, albeit off-stage.

“Think not on him till to-morrow,” says Benedick in the play’s final lines. “I’ll devise thee brave punishments for him. / Strike up, pipers.”

Lisi will be back in court on May 27, to set a date for his extortion trial.