NOW MagazineMovies & TVSaoirse Ronan: all grown up and ready for her second Oscar nom

Saoirse Ronan: all grown up and ready for her second Oscar nom

Nominated at 13, the precocious child actor has grown up and graduated to another awards-worthy performance in John Crowley’s moving immigration drama Brooklyn 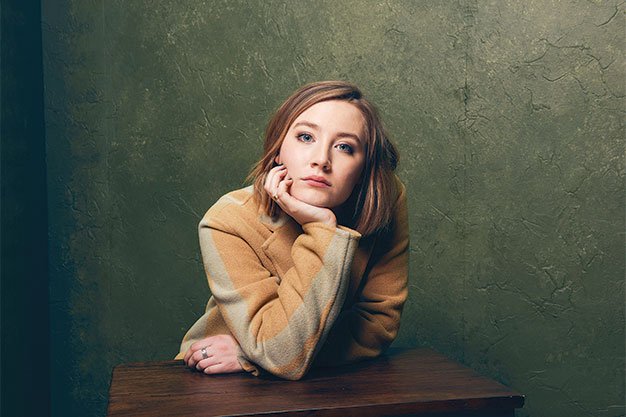 Something extraordinary happens about a third of the way through Brooklyn, John Crowley’s bittersweet adaptation of Colm Tóibín’s coming-of-age novel about an Irish immigrant.

Saoirse Ronan grows up and becomes a woman.

The precocious girl who got an Oscar nomination at 13 for Atonement, starred in a disappointing version of The Lovely Bones and then kicked major ass as a teen assassin in Hanna leaves behind the kids’ table for her first legitimate role as an adult.

And it’s thrilling to watch.

The role of Eilis, a small-town woman who emigrates in the early 1950s to the States for work, leaving behind her mother and sister, seems tailor made for her: she grew up in Ireland, is the right age, has the intelligence and inquisitive blue eyes of an old soul.

By coincidence, Ronan read Tóibín’s book when she was 19, not knowing that within a year she’d receive a script and, before filming, make her own personal move away from home – in her case, from Ireland to England.

“By the time we made the film I’d essentially gone through Eilis’s journey,” says Ronan on the phone from L.A., her warm Irish accent as soothing as a cold Guinness. “It meant a great deal more to me, having made that transition that we all make at a certain point in our lives.”

Brooklyn, she says, was an overwhelming project, the hardest thing she’s ever done.

“Even talking about it now,” she says, her voice skipping a beat, “I get very emotional. I was right in the middle of feeling a deep, deep homesickness, missing my own mom and figuring out where I belonged in between these two places. It just wasn’t like that when I was a kid. When you move out on your own, you go through an identity crisis. ‘Who am I when I’m a grown-up?’ It was raw for me to go through that, in life and in front of a camera.”

With her lilting accent, “mom” sounds like “ma’am,” and “raw” seems to have two syllables.

Dressing up in 50s fashions, especially when Eilis settles in Brooklyn and works at a high-end department store (under the scrutinizing eyes of Mad Men’s Jessica Paré), helped give her a feeling for the character and the era.

“It was the first time I’d got a chance to wear something a little more glamorous on film,” she says. “My face is usually sunburnt or scarred, or I’m wearing even less makeup than no makeup. Or I’m made up to look like a corpse or a vampire [referring to The Lovely Bones and the Neil Jordan film Byzantium].

“The costumes were so beautiful, and I didn’t realize how much healthier women’s body types were back in the 1950s,” she says. “The shapes of the clothes are much more womanly, allowing for curves. Women were encouraged to have boobs and have a bum!”

Director Crowley also got her to dial back her natural tendency to be affectionate.

“People were more restrained back then,” she says. “In the film, when Eilis reunites with her friend Nancy, I wanted to hug Eileen O’Higgins, who plays Nancy. John had to stop us from screaming and hugging. That just wasn’t done then.”

The heart of the film is the growing relationship between Eilis and her charming Italian-American boyfriend, Tony (Emory Cohen), whom she meets at a dance that could be a few subway stops from a similar one in Paddy Chayefsky’s classic Marty. The two actors have a playful chemistry that Ronan says was real.

“Emory came to Ireland a week before we started shooting, and we got to rehearse there,” she says. “The dynamic between our characters was what we had off the set, too. I called him out on everything. As we say in Ireland, I slagged him quite a bit, took the piss out of him. He is this serious New York kid, and I’m… not! The fact that we were both very different really helped when we did our scenes together. There was this real yin and yang feel.”

The film premiered earlier this year at Sundance, and that’s when Ronan discovered that what she thought was a very Irish film resonated with people from every background.

“The response by people who weren’t connected in any way to Ireland was incredible,” she says. “They’d either been the kid that moved away or the parent of the kid who’d moved away or they had grandparents who’d taken a similar journey. The film became instantly relatable to everyone.”

Last month she wrapped up filming Michael Mayer’s movie version of The Seagull, in which she plays the ingenue Nina opposite Annette Bening and Corey Stall. She loves Chekhov, she says, because he mixes comedy and tragedy in a way that suits her. She likes projects that are a little left of centre. This February, she’s set to star in a Broadway revival of Arthur Miller’s The Crucible.

Come February, of course, she and her Brooklyn team might also be up for some of those coveted gold statues.

“When Atonement happened I was a kid, so I wasn’t really aware of all the Oscar talk, but it worked out and it was great,” she says. “But I’ve also been on the other side, where there’s so much buzz before a film’s even made and then it doesn’t have that kind of success when it’s released. So I know how unpredictable these things can be.

“But listen, Jesus, it would be absolutely amazing for the film to get recognized. Even the fact that some people are talking about it in those terms is a dream. Whether it happens or not.”

And how has she kept her head on straight in an industry that seems intent on destroying young talent?

“I’m lucky that I have a really great mom who spent a lot of time before I came along with another actor, my dad [Paul Ronan]. She saw that world and she’s not fazed by any of that stuff. She doesn’t care if anyone’s famous.”

Then she pauses and giggles.

“Except for John Travolta. She loves him. She saw Saturday Night Fever 27 times, in the cinema. She paid for a ticket 27 times to see it. Sorry, Mom, but I just wanted to tell Toronto that.”

Saoirse Ronan on how she grew up not far from where the film was shot in Ireland:

Ronan on her parents’ history in New York City (and how her father literally shoveled shit):

On how her mother’s helped her keep her head straight in the business:

Read our review of Brooklyn here and more from our TIFF package here.