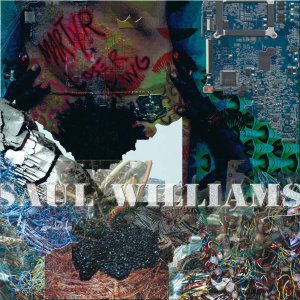 MartyrLoserKing is the online screen name of a fictional hacker from Burundi, whose story Saul Williams tells on his new album (as well as in a companion graphic novel and, potentially, a film). The multimedia approach and overt politics aren’t unusual for Williams, as well known as an actor, poet, spoken word artist, activist and author as a musician. He uses a variety of mediums to explore the poetry and romance of revolution, and prefers to adopt characters to tell stories than to lecture about politics.

His musical output has always freely crossed genre boundaries, a pattern that continues on MartyrLoserKing, with its mix of hip-hop, industrial, electronic, punk and African influences. The more overtly rock moments give the album a bit too much of a 90s alternative feel, but that’s got to be expected from someone who came out of the slam poetry scene and previously worked with Trent Reznor. One of the album’s closest contemporary comparisons is Kanye West’s Yeezus, but it’s just as likely that it was Williams’s eclectic career that influenced West.