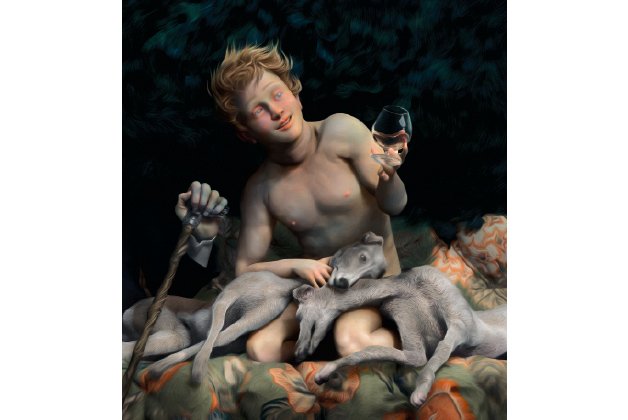 Angell’s current show features nine established and up-and-coming artists who work primarily in digital media. Occasionally termed post-internet art to underline the fact that we live in a digital age, the genre’s aims are as broad and diverse as the technology employed in its making.

This is the era of the hyper-real, of copies that do not refer to an original, and no one expresses this better than Rafael Ochoa. Using software to simulate the textures of Old Masters, his two paintings here land somewhere between Mannerism and pop surrealism.

In Red, his female figure is smiling and fully rendered but oddly lifeless. Her hair’s fullness recalls recent advances in Pixar animation, but that perfection has a distancing effect that is part of its interest. Ochoa’s infinitely detailed simulacra are copies without sources, pastiches of elements perfectly assembled in a digital vacuum. The artifice is chilling.

Other artists use digital technology to produce objects and artifacts that are distinctly analog. Aamna Muzaffar uses a variety of digital processes to create three-dimensional assemblage sculptures that appear to be handmade. Tobias Williams mines thousands of internet images to create semi-abstract landscapes that barely hint at their digital origins.

Artists are using current technology to interrogate older modernist practice. Mitchell Chan converts Sol LeWitt’s famous conceptual drawing directions into simple code, suggesting that any number of LeWitt drawings can be mechanically generated from the same code. Is it the same? A faux Ikea manual, cleverly titled LeWitt, hints at the possibility of mass-produced, computer-generated conceptualism.

Napoleon Brousseau’s complex self-portrait is at the bleeding edge in this show, technologically speaking. By downloading an augmented reality ap, viewers can see additional layers in his work, hinting at the blurring between digital and real that we can expect in the next decade.

Geoffrey Pugen, now considered a digital art pioneer, contributes his bird lady video, a subtly shifting portrait of a blinking bird-beaked woman in the style of grand manner portraiture. A decade old, it has proved prescient. The perennial themes of art are still at large in the new digital wilderness.