Saying goodbye to Xtra, at least on the streets

You won't see the gay bi-weekly in newsstands anymore, but what else will be sacrificed as it transitions fully into the digital world? 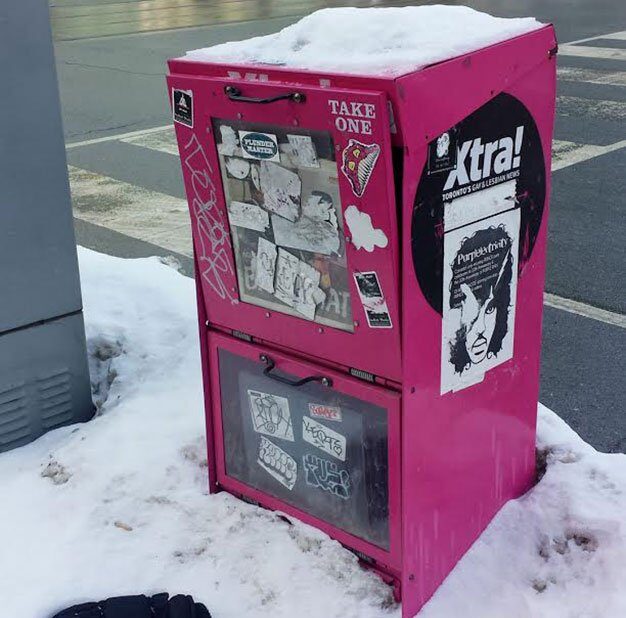 It’s the end of an era in the gay community. After 31 years, bi-weekly Xtra goes 100 per cent digital this week. Its Thursday (February 19) print edition will be the last to fill its pink newspaper boxes.

For many this is disappointing and sad – not just because of the job losses (12 let go already, from proofreaders to delivery people), but because of the loss of visibility in the streets. The paper has some 500 boxes and racks in total.

As playwright and long-time Xtra columnist Brad Fraser puts it, “The presence of Xtra boxes on the street is a visceral, physical experience in neighbourhoods.” It’s not difficult to see why, given the paper’s activist beginnings.

Xtra emerged in 1984 from the internationally known gay liberation monthly the Body Politic, which was written and distributed by enthusiastic volunteers. Even though many Body Politic writers were not professional journalists but idealistic gay activists, it often contained groundbreaking news, such as its seminal coverage of the 1981 Toronto bathhouse raids. Pink Triangle Press ran the Body Politic and still runs Xtra as a not-for-profit enterprise.

For years, Xtra thought of itself as a tabloid and also as the paper of record in the LGBT community. Increasingly, however, it seems to identify as a breaking news outlet focused on quickie online stories. One reason for this shift is the changing nature of news coverage: the internet beast demands fresh kill daily. Xtra’s local coverage has diminished, but it’s also true that the paper’s audience is changing. Xtra’s brain trust has seen the future, and it’s online.

Says Xtra publisher/editor Brandon Matheson, “When we looked at the financial and human resources sides, it became clear that our best strategy was to reach more people, to be more timely, to be able to do things online that you can’t do in print. It just made more sense to proceed with a digital-only strategy.”

The numbers seem to bear that out. Although specific figures were not provided, according to Matheson Xtra’s digital audience is growing rapidly visits to Daily Xtra were up 30 per cent last year. Views on its YouTube channel were up 58 per cent. Arguably, Xtra is evolving to reflect more of what’s going on in the gay community.

Video in particular will be emphasized in Xtra’s new incarnation. “It has more impact emotionally and speaks directly to the viewer,” says digital CEO David Walberg. A new mobile site, followed by the relaunch of Daily Xtra by spring, is also in the works.

Matheson says new “marketing and promotional ventures” will help maintain Xtra’s visibility in the community. Walberg, too, puts a positive spin on the loss of Xtra’s physical presence on the street, explaining that Daily Xtra “will produce more local content than ever and stay true to its gay village roots.”

Problem is, as even Pink Triangle higher-ups acknowledge, online publications earn less from advertising than print. Pink Triangle currently receives about 90 per cent of its income from Squirt, an online gay male sex site, but the highly competitive gay cruising market includes scores of players, including biggies like Grindr and M4M4Sex.

Let’s hope Xtra isn’t forced to follow the lead of online gay publications like Queerty, which sends out daily promotional emails that often use photos of famous men to entice people to click onto its site.

Fraser fears longer investigative pieces into and for the gay community will be sacrificed. Former Xtra reporter Andrea Houston says the end of what was a scrappy, ardent paper with a “let’s change the world” attitude is “disappointing and disheartening.” But she expects Xtra online to uphold the paper’s “long-time radical sexual agenda for gay rights.”

Councillor Kristyn Wong-Tam, whom Xtra all but endorsed in a tight race in 2010 when it ran a very positive cover story during election week, tells me a touching story about her 70-something father. She left home at 16 because he did not support her gay lifestyle. He’d get an Xtra every two weeks from a box in his neighbourhood to read about his daughter. He came to like the paper and read it cover to cover.

“As a person of a certain age, I have to have the paper in my hands. Many things online are not permanent,” says Wong-Tam, “but in print it can be there forever.”

I think the end of Xtra’s print edition is a big mistake, done mostly to save money. Readers from the older LGBT generation will likely be written off.

On the positive side, Xtra online may engage more young people.

James Dubro is a true crime writer and long-time freelance contributor to Xtra.

Updated February 20, 1:52 pm. An earlier version of this story erroneously stated that Brandon Matheson and David Walberg turned down an interview request with CBC to talk about changes at Xtra.