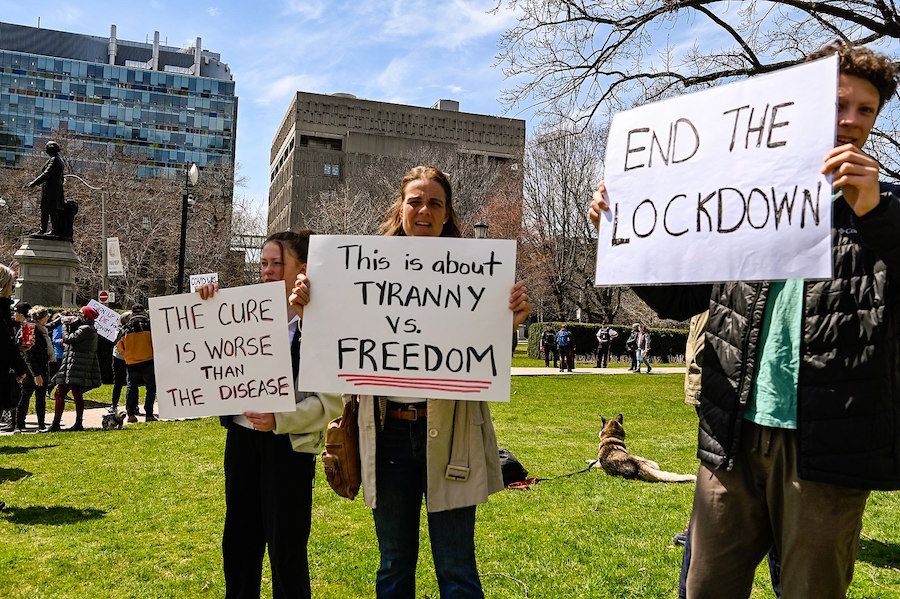 An anti-lockdown protest at Queen's Park on April 25 attracted about 200 demonstrators.

A year into the COVID-19 pandemic, after 10 months of lockdowns, social distancing and other restrictions, people are exhausted and confused and looking for any information that tells them there’s a way out of this thing.

And that desperation leads a lot of people to fall for COVID-19 misinformation that’s running rampant online, which is why Nova Scotia Senator Stan Kutcher and the University of Alberta’s Timothy Caulfield created Science Up First.

A collective of concerned scientists, researchers, information experts, health-care providers, science communicators and organizations, Science Up First is here – on the web, on Facebook, on Twitter and on Instagram – to push back against the falsehoods by offering hard facts and reality-based information to anyone who’s willing to see it.

On the latest episode of the NOW What podcast, Caulfield and his fellow Science Up First steering committee member Samantha Yammine discussed how they are combatting COVID-19 misinformation online. (Listen to the episode in its entirety on your podcast provider of choice, or at the bottom of this page.)

“We really felt it was absolutely essential to counter misinformation and [there’s] good evidence that we can do this in a meaningful way with good science,” he continues. “The goal really is to flood social media with the good stuff, and mobilize Canadians and people around the world to become part of this team, to become part of this movement.”

Yammine cites a Carleton University study that found 46 per cent of Canadians believe one or more COVID-related conspiracy theories.

“We knew that we had to address misinformation,” she says. “It was really important to do this on social media, because there was another great Canadian study out of McGill in the summer that showed that a lot of the source of misperceptions about COVID, that correlated with poor compliance with social distancing and things like that – a lot of it originated on social media.”

“The people getting their [misinformation] from social media were more likely to act on it,” she adds. “We really needed to go where people are if we’re going to try to combat that: be exactly where all the misinformation is, put the science there, make it accessible, make it highly shareable, and break some of those misinformation chains.”

That brings us to Science Up First, which is led by the Canadian Association Of Science Centres, COVID-19 Resources Canada, and the Health Law Institute at the University Of Alberta. Te initiative sees the proliferation of COVID-19 misinformation online as a genuine threat to Canadians’ health and safety, since it can all too easily lead to real-world consequences like the anti-lockdown protests that resulted in 10 arrests – and a near-riot at a downtown Shoppers Drug Mart – over the weekend.

“There’s a really interesting phenomenon that’s happening,” Caulfield explains. “It’s something that’s become more common over the course of the pandemic, and that is the marriage of particular ideological positions with particular kinds of misinformation. The anti-vaxxers use language like ‘choice,’ ‘liberty’ and ‘freedom,’ or they talk about civil liberties and their charter rights. And that’s an entry point for people into these communities. And it allows them to sidestep what the science actually says.”

And once misinformation has a foothold, the conspiracy theories follow – like the entirely unscientific assertion that 5G cell-phone towers caused the pandemic, or that Bill Gates is planning to use vaccination initiative to microchip the world’s population.

“It’s become part of that community’s worldview right there, their package of ideas,” Caulfield says. “You want to get to misinformation before it gets to that point. This is really about moving the dial, right? This is really about talking to the general public. We always joke with our kids about when was the last time someone said, ‘You know, I think you’re right. I guess I was wrong.’ No one ever says that. This is really about a long-term initiative to get people to know where the good information is. Evidence tells us these kinds of strategies can work.”

“There’s a loud minority who are trying to shake our trust and our optimism and change everything up, but the vast majority of people? They want to comply,” Yammine says. “They want to get out of this. They’re doing their best, they’ve made tremendous sacrifices… people are really working so hard. We’re just used to [thinking], if we’re doing as we’re told and we’re following [protocols], we don’t really need to share it. And part of Science Up First is reminding people: ‘Hey, actually we do need you to be an ambassador for science. We need you to show how hard you’re working and how excited you are to have learned something new, because otherwise the loud minority dominates.

“We want to unite and show solidarity with one another, and show we’re making a collective effort.”

Listen to the full conversation on COVID-19 misinformation the latest episode of the NOW What podcast, available to stream LINK or directly below.