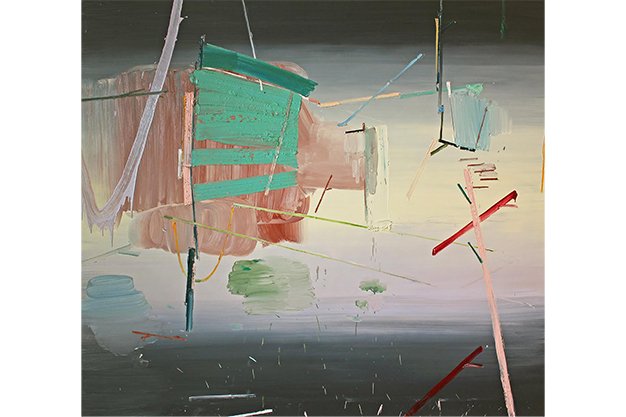 The large canvases in Scott Everingham’s new series reveal the painter at a moment when he’s refining both his palette and his vocabulary. Not that he wasn’t always strong: Everingham, a three-time finalist in the RBC Canadian painting competition, makes intriguing explorations of structure and colour he calls narrative abstractions.

The show’s title, Mires, lends a theme. Each canvas is underpainted with a wash of colour from dark to light, suggesting a body of water. Lines in the foreground hint at ghostly architectural structures. The placement of each element appears to have been judiciously considered.

In Beacons, these elements all work synergistically. The graded background moves from lemony yellow at the bottom to burnt umber at the top. Two stick-like spectral structures suggest lifeguard’s chairs, staggered behind one another to add depth. There’s a lush smear of minty green and light blue, plus dashes of orange and pink, in the immediate foreground two intriguing lines of coral.

Why are they there? Beacon’s colour scheme and composition are wildly improbable, and yet he makes them work. Like all strong painting, his work makes you want to stand in front of it a little while longer to see what unfolds.