“Don’t think thought that if you open your mouth that you’re not going to get torn apart by a drunk drag queen on stage,” says organizer Bobby 'Valen' Beckett 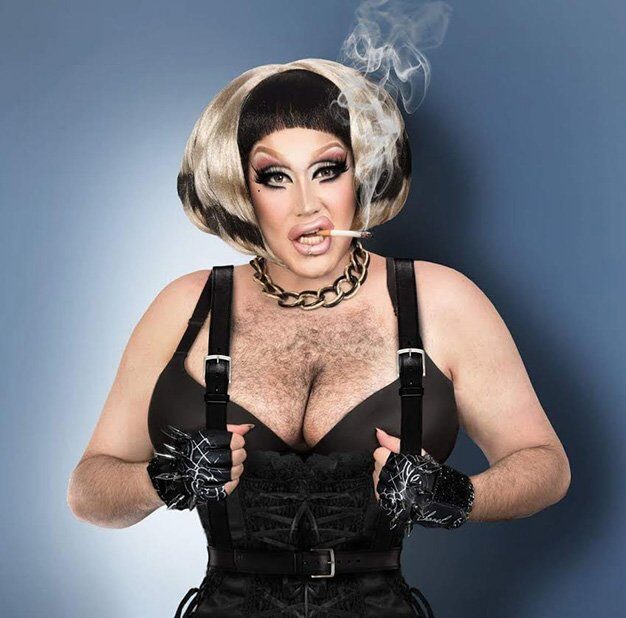 They’re part of the team that’s bringing a new event to the Royal. Screen Queens is a hybrid drag show, comedy set and film screening. The premise is fairly simple: two drag queens take the stage and lead a rowdy audience through a cult classic film, encouraging them to get drunk and loud as hell. Imagine Mystery Science Theatre 3000 being led by a drunk Elvira.

“There is nothing quiet about Screen Queens at all,” says Beckett. In fact, they encourage audience members to heckle the hosts. But choose your words wisely.

“Don’t think thought that if you open your mouth that you’re not going to get torn apart by a drunk drag queen on stage,” Beckett says.

“I mouthy as hell,” Allysin Chaynes says of herself. She’s the brash drag queen leading crowds through each month’s film. But fret not: she says there’s no point in ripping someone to shreds if they don’t find it funny.

Beckett is reluctant to make the obvious comparison between Screen Queens screenings and Rocky Horror Picture Show, but the similarities are obvious. In fact, each film shown comes with a list audience participation cues, letting attendees know when to yell, boo or chug. And just like Rocky Horror, people who come to the screenings at Screen Queens are already fans of the films.

The movies being shown comprise staples in the camp canon. Their first screening was Showgirls, followed last month by Drop Dead Gorgeous. And this coming Sunday, Goldie Hawn and Meryl Streep battle for eternal youth in Death Becomes Her.

The movies selected are easily identifiable as outrageous and even dismissable (despite local film academic Adam Nayman proclaiming that Showgirls “doesn’t suck”), but there’s an unidentifiable queer theme to them. However, none of the films actually feature any queer characters. This was an intentional choice for Beckett and Chaynes.

“For us, what we were trying to do was not choose obvious queer movies,” says Beckett. “It’s not about self-flagellation about coming out stories…it’s more about some things that queers as a whole for some reason have adopted.”

They say these movies in particular are for those who have always felt like outsiders, even within the queer community.

“We thought we were alone in our basements, reciting the words to all of these films,” says Beckett. “We’re the weirdos.”

According to University of Toronto’s Charlie Keil, the pairing of camp and queer is pretty natural. He says that celebrating being separate from the mainstream is arguably a part of the queer identity, and that’s something that unites the films in this series.

“If you think of queer culture as to some degree celebrating apartness…these screenings are playing up on that,” Keil says.

There’s seemingly a secret reading to these films that makes them obvious queer and camp selections, so long as you’re in the know.

“And camp is esoteric — something of a private code, a badge of identity even, among small urban cliques,” wrote Susan Sontag in 1964 in the famous Notes on Camp, one of the first essays to try to define the genre and sensibility. Such coded cues could also have easily described the queer experience before mainstream acceptance.

However, Keil says that camp doesn’t have to be baked into a film for it to be adopted for its campiness. Rocky Horror is obviously over the top, but The Sound of Music, with its straight-laced composition, has been adopted by camp audiences.

In addition to the campy and queer films and the drunk drag queens on stage, Screen Queens is also subversive.