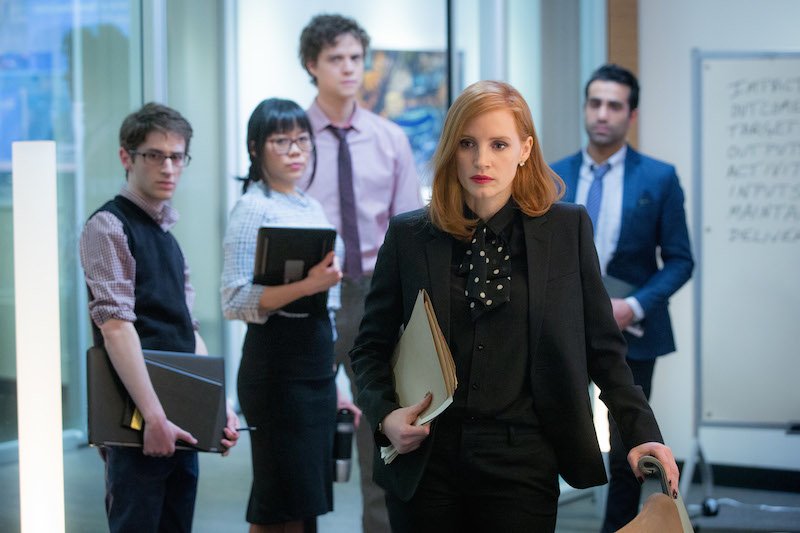 Miss Sloane is the sort of big American issue picture that Stanley Kramer used to make in the 50s and 60s – self-serious and full of scenes where characters rattle off statistics or deliver passionate speeches about the issue of the moment.

In John Madden’s film, that issue is gun control, couched in a drama about a top Washington lobbyist (Jessica Chastain) who crosses K Street to push for sweeping gun-control legislation and finds herself facing off against her old colleagues. Can she game the system for the greater good? Will the system even let her try?

We’re mere minutes into the movie before those questions are asked aloud, because Miss Sloane doesn’t have much room for subtlety. It’s a generic Washington intrigue picture, the kind where bad guys meet in expensive restaurants while good guys grab dinner at noodle joints. (Ima­gine Aaron Sorkin writing an episode of Scandal and deciding to make it About Something.)

But these movies can have their pleasures, and Miss Sloane has Jessica Chastain goosing it to life with a fascinating performance. Chastain lets us see behind her character’s inflexible persona, shifting her voice up or down to show us how genuine  Elizabeth Sloane is being at any given moment. Her choices cut through the contrived plotting and moralizing walk-and-talks like a knife, making sure we care about the character even when we know exactly what’s going to happen around her.

She’s not the only one making an effort either. Gugu Mbatha-Raw, Mark Strong and Michael Stuhlbarg are all pretty good, too, and the Toronto shoot means the film is heaving with local talent like Ennis Esmer, Raoul Bhaneja, Grace Lynn Kung, Al Mukadam, Sergio Di Zio and Douglas Smith.

I just wish Jonathan Perera could have done more to conceal his script’s mechanics, or at the very least that Madden had found a way to obscure them. The big twists in Miss Sloane are either clumsily telegraphed or pat­ently phony, undercutting the mo­vie’s stabs at real-world resonance.

And there’s another, larger tragedy overshadowing Miss Sloane, and full credit to my colleague Radheyan Simonpillai for articulating it: Donald Trump’s election makes a movie in which an intelligent, impatient wo­man attempts to save America from itself instantly irrelevant.

And that’s a bummer.