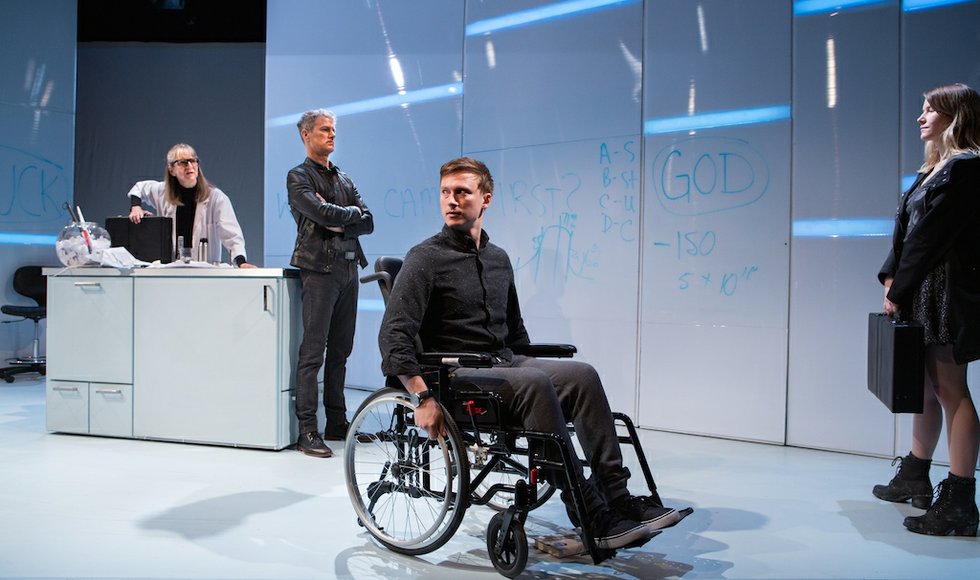 Since penning Sequence in 2011, Calgary ophthalmologist Arun Lakra has won two playwriting awards for this tense, science-packed meditation on the roots of coincidence, luck and synchronicity. Modelling his narrative on the double helix structure of DNA, Lakra presents two complex alternating storylines that eventually connect in an unexpected way.

In the first, a stem cell researcher (Nancy Palk) who is going blind traps a wheelchair-bound Christian student (Jesse LaVercombe) she considers to be extremely unlucky in her office in an attempt to study him. In the second, a slick author and motivational speaker (Kevin Bundy) whos made millions gambling is confronted by a contest winner (Ava Jane Markus) who thinks his luck can help her with a medical quandary.

Both strands end up being protracted, pedantic and antagonistic back-and-forth arguments that let Lakra wax philosophical on the usual vacuous popular science fodder: science vs religion, free will vs determinism, facts vs faith.

Lakra checks off all the topics: entropy, complexity, Darwin, causality, God, DNA, the golden ratio, galaxies, Pascal, the origin of life. Its like a staged word cloud from a Richard Dawkins or Michio Kaku book.

When one character starts writing the Fibonacci sequence on a white board, you just know a gushing Isnt this just fascinating? explainer is coming. Its cloyingly saccharine pop science.

The action is well staged by Andrea Donaldson, who smoothly manages overlapping transitions between separate narratives occupying the same space, and the lit-up backdrop inspired by DNA fingerprint profiles by designer Jason Hand is a cool touch, but whats missing are characters we might care about.