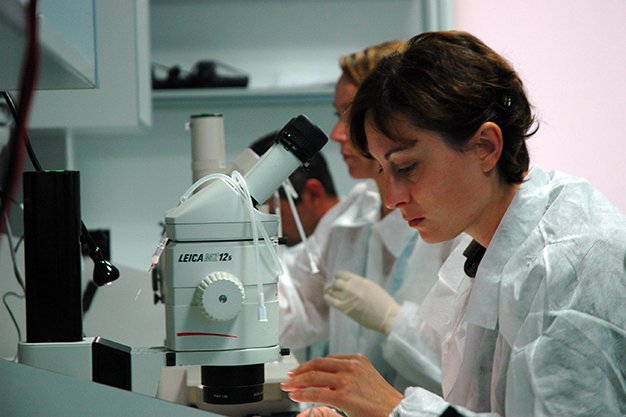 Science (the journal) is at it again. This time with some outdated (and sexist) advice on how to get ahead in the world of academia.

Last month, Science Careers, an online imprint of the prestigious academic journal, published an advice column recommending that a young female graduate student “put up” with her advisor looking down her shirt during meetings.

Then, earlier this month in an op-ed entitled Getting Noticed Is Half The Battle, U of T prof Eleftherios P. Diamandis offers the advice that the way to become a full professor is to be visible.

While I imagine his research output had more to do with him getting hired than walking in front of the department chair at every seminar (really, that’s a strategy he used), Diamandis went to extreme lengths to get noticed.

“I worked 16 to 17 hours a day, not just to make progress on the technology but also to publish our results in high-impact journals. How did I manage it? My wife—also a Ph.D. scientist—worked far less than I did she took on the bulk of the domestic responsibilities.”

Good thing he didn’t have to worry about housework, parenting or cooking, right? His wife (also a PhD scientist, remember!) did everything at home while also pursuing a career in the field.

While this one-partner-at-home arrangement can work for couples that mutually choose it, presenting it in a career advice article not only reinforces outdated gender stereotypes, but arguably holds women back from careers in science, an area in which they are already underrepresented.

There are a lot of women in undergraduate programs (though fewer in the sciences), but the numbers get smaller the higher you go up the academic food chain.

In 2011, only 23 per cent of full professors at Canadian universities were women.

While there are a number of reasons for this – like the after effects of girls being socialized away from math and sciences – women being expected to put their careers on hold to do more at home is certainly part of it. How can she get noticed and move up like her husband when she has to leave to pick up the kids every day, and spend her evenings doing laundry and washing dishes while her husband finishes up his next round of experiments working 16 to 17 hours in the lab?

Let’s do some math. That leaves 7-8 hours in the day for everything else.

Since that’s the exact number of hours recommended for healthy sleep, Diamandis was certainly sleep deprived, unless he found a way to teleport home and did nothing but work and sleep.

In the short term, not getting enough sleep leads to a “foggy” brain and memory problems. Over days, it increases blood pressure and suppresses your immune system. In time, it can lead to heart disease, stroke, diabetes and other health problems. None of this is worth those extra few hours of work. Especially because sleep-deprived you isn’t capable of the same focus and creativity as your fully-rested self.

Here are some other things that Diamandis was likely neglecting because of his punishing, self-imposed work schedule: exercise, time with friends and family, hobbies or any form of relaxation. It’s no way to succeed in life or academia, as Diamandis’s colleague, U of T prof Bryan Gaensler points out in this rebuttal of what he describes as “the macho male academic myth.”

But the saddest thing about Diamandis’s advice is that today’s job market is entirely different than when he rose up the ranks in the 1980s.

The majority – 76 per cent – of university teaching jobs are filled by post docs, graduate students and adjuncts, the insecure contract position Diamandis had while he was working those 16-hour days. Tenure track jobs are very rare, and when they become available, hundreds of people apply. This leaves many PhDs on the outside, living in poverty and never knowing where they’re going to live from year to year.

So, if you’re an adjunct today, Diamandis’ advice is entirely useless to you. Since your chances of getting a job in your field are so depressingly low, you’d likely end up isolated and burned out, without even a job to show for it.

In June, Nobel Laureate Tim Hunt suggested that co-ed labs shouldn’t exist because women “fall in love with you” and “when you criticize them, they cry.” He ended up resigning his honorary position at University College London.

Late-career scientists, here’s some advice for you: think twice before imposing your outdated wisdom on today’s young academics.