At least it's shorter than The Hobbit 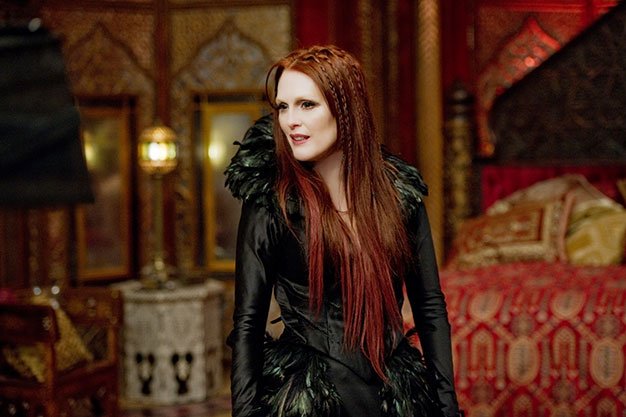 The Norbit effect, if such a thing exists, shouldn’t hinder Julianne Moore’s Oscar chances. She is a welcome presence in the spectacularly bad dungeons and dragons fiasco Seventh Son, playing evil witch Mother Malkin, who tries to wipe out mankind. We’re rooting for her in the hopes that there won’t be a sequel.

Moore vamps and camps it up, seemingly aware that the only way to liven up the dreadful material is by trying to out-wicked the Wicked Witch of the West. In her brief scenes, she makes Jeff Bridges look slack, which isn’t that hard to do since he bumbles and mumbles about as the Gandalf-lite witch hunter Gregory, doing the True Grit routine we’ve become familiar with. That shtick nevertheless adds some comic colour to the limp one-liners he has to deliver. His garbling of dialogue might be code for “My lines suck and I don’t know what I’m doing here.”

Gregory responds to Malkin’s incoherent world domination plans by recruiting a bland young apprentice named Tom Ward (Ben Barnes), who’s destined to be “the one” for battle since he’s the seventh son of a seventh son, the descendant of ancestral hocus-pocus that’s never really explained. The film spends precious little time developing its mythologies or characters in a script that goes nowhere new.

Perhaps there’s a longer, fleshed-out (though probably no better) version of Seventh Son kicking around. The movie was shot almost three years ago and has been delayed in post-production purgatory, as if the filmmakers were waiting for The Hobbit Trilogy to hurry and finish already.

Unlike The Hobbit, though, Seventh Son is over quickly, like ripping off a band-aid. Soon enough we won’t even remember the pain.