Sexy, single and hot for Tinder

I fucking love being single. Some chicks bitch. 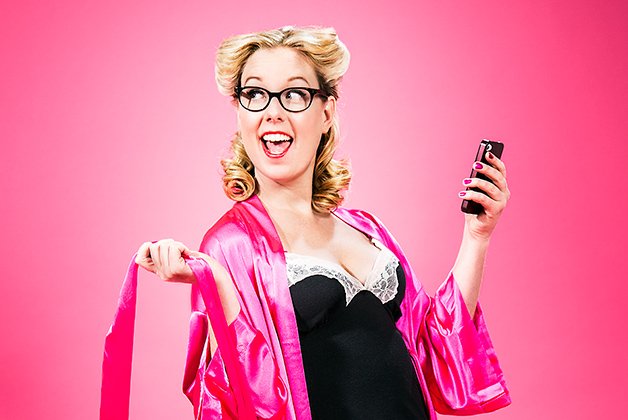 I fucking love being single.

Some chicks bitch about it, like it’s some sort of a rash they need to get rid of. I don’t share their sense of embarrassment over my solo marital state. I have a shitload of awesome friends, a dream to chase and three functioning vibrators. So I don’t really stress out over finding “the one.”

You might see being single as being alone. I don’t interpret it that way I see it as being free.

I may love the single life, but I still have urges. We all naturally crave sex. You can pretend you don’t (as I do in front of my parents), but you do. As a woman, I used to feel I had to mask that. I’m supposed to stick to the good, old-fashioned search for “true love.” Save sex for relationships. Be a “good girl.” Because I’m so fucking perfect, obviously.

When I was in New York City last summer, I had one of those classic vacation flings, a two-night stand. I don’t often do one-night stands. I like to see a dude’s behaviour the day after I don’t put out. If he’s not a dick about it, I usually turn around and put out. (Women and their creepy tests, eh?)

I like holiday hookups. I don’t have to worry where “it” (the non-existent relationship) is going, because I don’t live in New York. We’re done the second I get on the plane. (Well, sort of. I still get dick pics.) No stress, no emotion, just the pure enjoyment of living in the moment.

This time, when I got back to Toronto, I wondered, “Why don’t I ever do that in my own city?” I’m a free spirit on vacation but such a creature of habit at home. Why?

Then my friend told me about Tinder. It’s like a cross between Grindr for straight people and Hot Or Not. You can actually change your settings and browse for both sexes if you like I did. It also shows your mutual friends and interests on Facebook. (Tip: I automatically hit the heart button on any dude who likes Taylor Swift.) Tinder is basically the app version of a Thursday night at 2Cats.

Before Tinder, I had never online-dated. Why would I? I love being single. To be forced to write a mission statement about how I’m the “perfect” girl for you? I can’t promise that. I’m gassier than I look.

What I like about Tinder is that it replaces expectations of falling in love with hopes of a cool drinking buddy, one you might want to make out with at the end of the night.

As of today, I’ve been on 35 Tinder dates. I’ve slept with three of them. I don’t think that calls for the S-word, do you? I have pretty much the same average as a lot of Toronto sports teams. (Fuck! I want that joke to work, but the Raptors are kicking ass right now.) I know slut-shaming is a hot topic these days. I usually like to avoid those, with the exception of watching The View.

But I’d like to challenge people who throw around the S-word – and its male counterpart, “player.” Have you ever stopped to think why someone doesn’t want a relationship?

Here’s a list of some types of people I’ve met on Tinder and their very acceptable reasons for not being ready for commitment.

1. Divorced people: Yes, Tinder is not just for kids. It’s for adults, too. I’ve met several men in their 30s and 40s who never expected to be single again. I don’t blame these guys for not rushing into anything. If you were just trapped in an elevator, wouldn’t you take the stairs for a while?

3. Career-oriented people: Busy, busy and more busy. It’s not a booty call. This is the time we get off work.

4. Tourists: I’m in a new city! I want to meet new people! But I’ve sworn off long-distance relationships since that guy I met in a nightclub in Vegas who convinced me I was his soulmate so I should move across the continent for him. It lasted two weeks. Lesson learned. Short-term flings only. Apply within.

5. Sagittariuses: If you’re a Sagittarius like me, you’re a free spirit (although this season of The Bachelor totally ruined that term for me). Marriage was invented when people only lived to be 27. Since we’re all hopefully living well into our 80s, isn’t it time we delayed taking the plunge?

Over the Christmas holidays, I was back home in Vancouver when my 92-year-old grandma made the most interesting observation to my dad, who then relayed it to me.

She said, “Have you ever noticed that Christina is the only one in the family who is unmarried and has no kids, and yet she seems like the happiest one?”

You should also know that Grandma Walkinshaw is on a gluten-free diet and can still kick my ass at backgammon. This bitch knows what’s going on in life.

When I was a little girl, I used to have these very strange yet very magical moments. It would seem like everything in the world disappeared for a few seconds. I didn’t understand how the human body works, how we all function, why we all move without batteries, why we feel the way we feel.

They were completely involuntary tingles, the same kind you might have during romantic encounters, but mine were between me and the universe. All I could feel was the pure bliss of simply existing.

Sometimes I got those tingles in the back seat of the car driving home from Grandma’s house. Sometimes I got them during one of my many insomnia-ridden nights. (Bedtime was far too early for a girl with my imagination.)

Sadly, I don’t have those moments very often as an adult (except that time I tried ecstasy in university). But I wish I did.

Everybody’s so eager to tweet when a celebrity dies, but nobody ever celebrates an average person’s just being alive.

This Valentine’s Day, let’s not obsess over being “single” or “taken.” I challenge you to love something we should all be loving. Love life. Bring a Tinder date. It’s a good time.