Shadowy Men on a Shadowy Planet get the box set treatment

Experience the instrumental rockers’ catalogue again – or for the first time 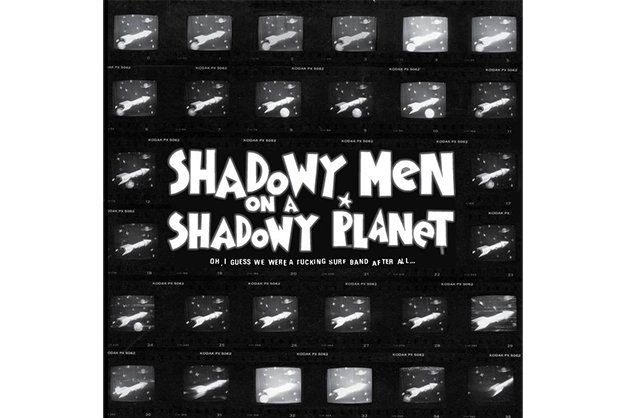 Out of print forever, Shadowy Men on a Shadowy Planet’s three albums have been meticulously remastered for circulation in a beautifully designed new box set (out on Record Store Day via Yep Roc) called Oh, I Guess We Were A Fucking Surf Band After All…

This means that the beloved instrumental band’s monumental display of punk-infused musical proficiency, hilarity, irreverence and sheer joy can finally be experienced by fans who might not have any idea how impactful they truly were.

Packaged with a bonus slab of rarities, b-sides and treats, the box also contains liner notes that contextualize their history and influence. A particular section about 1991’s Dim The Lights, Chill The Ham caught my attention. While their 1988 debut, Savvy Show Stoppers, was a compilation of singles, Dim The Lights was their first proper album, capturing a concentrated blast of unreleased material.

The widely acclaimed and relatively popular Toronto trio of guitarist Brian Connelly, drummer Don Pyle and bassist Reid Diamond could be heard during every episode of The Kids In The Hall sketch comedy show. The two camps were close and relied on one another’s creative spark. “Sometimes their music was better than our comedy,” Kevin McDonald says in the updated liners for 1993’s Sport Fishin’: The Lure Of The Bait, The Luck Of The Hook.

But not everyone felt this way. Take Rush, who crossed paths with Shadowy Men at Toronto’s Reaction Studios, where the latter were working on Dim The Lights.

“Not long after, Rush released the song Chain Lightning, bearing an uncanny resemblance to some S Men ‘licks,’” Ted Bogues writes in the album’s fresh liner notes. “Borrowers borrowing from borrowers. S Men refused to wear the kimonos Rush offered in trade. All that dough and they still buy polyester. Ugh.”

It’s true: Rush’s Chain Lighting and the Shadowy Men songs Our Weapons Are Useless and Zombie Compromise have staggering similarities. It’s weirdly heartening that a band as big and idiosyncratic as Rush might feel compelled to pay homage to (or rip off, sure) Shadowy Men.

That’s how great they were during their original 1984-1994 run and how wonderful they’ve been since reconstituting in 2013 with the Sadies’ Dallas Good on bass in place of Diamond, who passed away in 2001.

In another liner-note testimonial, Constantines’ Bry Webb writes that hearing the band, as a teenager, was “the first time I understood coolness to be connected with uniqueness, cleverness and independence. It’s music that is as disarmingly fun to listen to as it is deliberate and artful.”